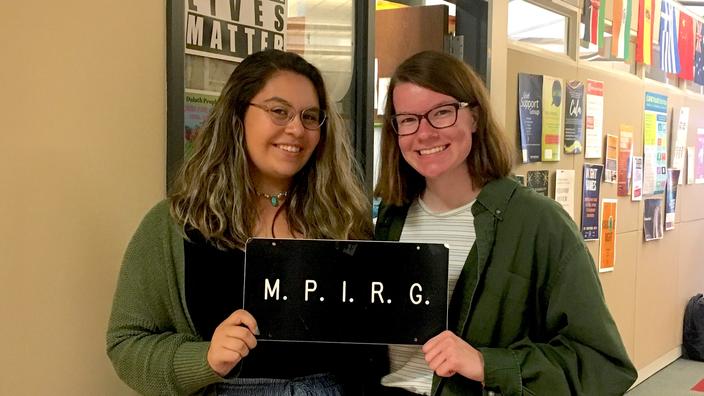 UMD's MPIRG offers students a voice and a vote.

According to the Pew Research Organization, in the 2012 election, 46% of eligible millennial voters voted and 61% of eligible Generation X’ers voted. Since then, these young adult voting rates have continued to increase, by 5% and 2%.

As voting season emerges, MPIRG is gearing up to encourage and support young adults to vote. A big push, called the “Get Out the Vote” campaign, is aimed toward the midterm elections of state representatives.

While the percentages have increased, there is still progress to be made. “Young people make up 20% of our population, but yet, are severely underrepresented in the polls,” Tyra says. She considers getting young adults to vote as an incredibly important endeavor.

Tyra is currently one of the social justice task force leaders, along with Becky Green, of UMD's MPIRG. She was attracted to MPIRG as it is a student led, advocacy organization that focuses on improving the community, and targeting significant state, national, and global issues.

Tyra knows that although there is not a way to actually make students vote, MPIRG as an organization can encourage students to register to promote easier and more accessible voting. “MPIRG is a nonpartisan organization,” Tyra says, “So we don’t care who students vote for, as long as our population is being fairly represented by elected officials.”

As MPIRG consists of three different task forces, the democracy and economic justice task force advocates for economic justice, by being responsible for the “Get Out the Vote” campaign and promoting the Homeless Bill of Rights.

“MPIRG as an organization correlates with a lot of my personal values, [such as] justice, equality, and helping those less fortunate than myself,” Tyra says.

MPIRG, in the past, has been extremely successful in their efforts. This organization has been known for getting sweatshop-free clothing in the UMD bookstore and getting fair trade coffee in the campus coffee shop. MPIRG at UMD has a notable history. They were part of the 1970s movement that made the boundary waters a paddle-only zone.

“We have the opportunity to make a difference,” Tyra says, “but only if everyone gets out and votes.”

Tyra Jaramillo (left) is pictured above with Becky Green.

MPIRG meets on Tuesdays at 5 pm in the Garden Room.