From Hope to Healing 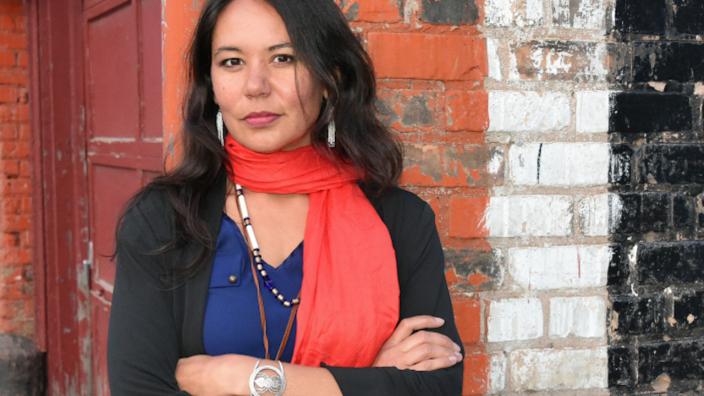 An Interview with Michelle Johnson-Jennings, director of the Research for Indigenous Community Health (RICH) Center.

Dr. Michelle Johnson-Jennings is a trained clinical psychologist, a health researcher and advocate for tribal communities and a member of the Choctaw Nation. Johnson-Jennings has been with the College of Pharmacy on the University of Minnesota Duluth campus since 2011 and has been director of the Research for Indigenous Community Health (RICH) Center since 2013.

An expert on cultural differences between westernized medicine and indigenous populations, Johnson-Jennings first became interested in the psychology and cultural differences around pain management, during her residency. “There are a lot of cultural barriers around what pain means to the patient, as opposed to the health care provider.”

She found patients would sometimes tell the doctor their pain level was ‘fine’ only to claim later that their pain was severe. Often they had been managing the pain when asked, so they didn’t mention it. But to the physician it would seem like they were lying, so they might not be offered appropriate pain medications.

There was clearly a need for her skills and understanding in this area. Many indigenous people suffer from addictions. Johnson-Jennings was aware that addictions are related to trauma. “Genetic research has shown that if you have a grandparent that was subjected to some kind of trauma, that future generations may experience higher levels of addiction and other illnesses.”

Obesity is one of these illnesses. “We have such a high rate of childhood obesity, as well as adult obesity. And our rates are rising, actually, while other races are stabilizing or lowering.” Chronic diseases among indigenous people have also increased. However a positive environment can lower the risks of chronic disease.

Along with mentor and friend, Dr. Karina Walters with the University of Washington, Johnson -Jennings spent about 3 years developing a pilot project with interventions to correct some of these health issues. They learned from the Chief of the Choctaw Nation, the health director, and other tribal leaders that the community is in a state of crisis due to high rates of diabetes, obesity and other health concerns.

“For the first time in years, especially among the Choctaw Nation, they are very concerned because they think parents will outlive their children.”

The intervention program they designed combines therapy and interview sessions among tribal women and is centered on the walk. They’re asked to remember what their ancestors went through, focusing on the love the ancestors had for these future generations and their vision for health and wellness. This helps them to reframe the trauma of the walk, to see the sacrifices the ancestors made for them to be well.

Why focus on women? “We decided to focus on women because the Choctaw Nation is matrilineal. Traditionally the women control the household.” Johnson-Jennings and Walters began with women and are adding children and men as interest increases.

Women are also cultural leaders in the tribal community and their excitement about health has motivated others. Tribal leadership has begun taking the walks “in mini versions” to get back in touch with the ancestral vision of health and well-being.

The curriculum for the leaders is a little different than the women experience. Jennings explains it includes more historical information, especially about the Choctaw leaders at the time, what they said and what was recorded about them.

“The Choctaw moved with the hope that they could be free and remain Choctaw, as well as that future generations would be healthy.” Johnson-Jennings has heard reports that the leaders could see “some of the resilience that was there, is still present in the community.”

The success of this project has produced several spinoffs, not only among members of the Choctaw Nation, but other tribes as well. The United Houma Nation is related to the Choctaw Nation. They heard about the work being done with the Choctaw women and were interested in doing a similar intervention. They contacted Johnson-Jennings and Walters about a year ago.

The United Houma Nation is facing their own health crisis through the loss of a great many acres of land. The oil company has damaged the ecosystem, killing trees, making the land unusable for growing vegetables, and creating high rates of contamination that has increased health issues among the people.

When she walked with the Choctaw women, Johnson-Jennings had already created the intervention model she would use. However for the walk with the Houma Nation, she has been working with them to determine their framework for health, after concluding the walk. The leaders wanted to do something that focused not just on obesity and addiction but that also created excitement about overall health.

So Jennings and Walters chose a historical migration route and walked with the women of the Houma Nation. Along the way they talked about health and healthier eating. The women were encouraged to eat fresh fruit and vegetables and to eliminate soda, not just during the journey, but ongoing. They were also asked to continue meeting so they can support each other and help encourage their communities.

When facing these issues, tribal communities already know what works well. “Our ancestors were highly skilled scientists and they know so much about the natural environment . . . [even] at a genetic level where they would tell stories about how trauma can affect subsequent generations. But how do we access that information? How do we talk about that and reinvigorate our community to be working towards health?” Johnson-Jennings hopes her work can help by including a different perspective.

What actually happens on these walks? Johnson-Jennings describes how she accompanies the women, walking along with them and sharing the experience over a 10-day wilderness experience. “People are very tired. We’re camping out during the summer, so it’s very hot and [there are] lot’s of bugs.” In order to gather data she interviews participants before and after, but not during the walk.

Instead, during the walk they think about different themes. For the Houma Nation they focused on mindfulness, fulfilling their ancestor’s vision for their people and the tribe’s vision for future generations. Johnson-Jennings asks them to think about, “How do you want to be perceived as an ancestor?”

Community engaged research is typically slow. It can take a long time to achieve publication. The tribal community owns the data so the researcher must receive approval in order to submit anything for publication. This further slows the process and can add other challenges. Historically the tribal communities have had a lot of distrust about research due to ethical violations around research procedures.

Sensitive to these concerns, Johnson-Jennings takes the time to engage more fully in the tribal community. “It’s a lifestyle approach that you are constantly thinking not only about the research, but about the partnership and the relationship and maintaining that relationship.”

It’s encouraging that the process of doing this research has had immediate rewards for the community. Jennings describes that some of the women involved had never tried fresh fruits and vegetables before. “Because of their isolation and lack of access, that wasn’t part of their life.” Johnson-Jennings has seen them not only change their own habits but they’ve shared this in the community.

“The women are excited to tell their stories, and discussing what keeps them motivated to stay healthy, motivates them further.” Johnson-Jennings adds, “Tribal leadership is also taking notice. Health interventions are seen as exciting and thinking about policy changes could support that.”

What is Johnson-Jennings looking forward to next? “I would definitely like to look more into food addiction.” She hopes to learn if addiction to food is truly an addiction or an indicator of addictive tendencies, and how it’s related to trauma.

“He is more of a qualitative researcher”, says Johnson-Jennings, “very skilled in doing Photo Voice visual stories, and working with communities.” She feels they work well together, he using a qualitative method approach while she designs health interventions and more quantitative surveys.

“It’s his job [with RICH] to be in the community and work on tribal relationships, discussing the research more broadly, which is part of his health education background. He is aware of what it’s like to do research from an indigenous perspective.”

Johnson-Jennings hopes her work will help break down a few barriers within the academy around community engaged research. “Research often centers on disease and what’s not working. But the lesson we learned is that we can focus on the positive and prevention and still obtain the grants we need.”

“I feel really honored to work with my tribal community, that they would partner with myself and our team conducting this research. I have a lot of respect for them and a shared hope that as we work together we will increase our health and be well.”