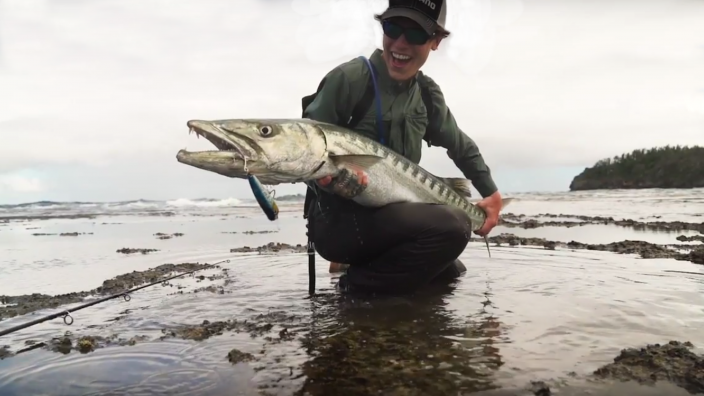 Ever since UMD senior Mavrik Joos can remember, he has been a part of the fishing world. His earliest memories involve sitting by a lake, so small he was still in diapers, waiting for a boat to be launched.

Mavrik recalls holding his first sunfish. “I still remember it,” he says. “I had on a green-striped shirt, and I was wearing the biggest smile on my face . . . no teeth. 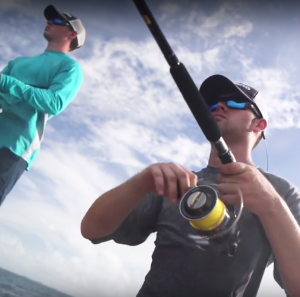 That marked the beginning of his passion for fishing that would later take him on a tropical adventure.  When his interest in fishing joined his keen interest in film, it gave him the opportunity to produce promotional videos for various tackle manufacturing companies while in Fiji.

Mavrik filmed outdoor activities while growing up. He made skateboarding videos, fingerboarding videos, sledding videos, and even commercials for Spin Master toys. He says he learned a lot from simply having hobbies that “depended on filming.”

As a UMD student, he came up with the idea of creating a fishing documentary named “10,001 Casts” with his childhood friend, and now roommate, Adam DeMarchi. They filmed it in Hayward, Wisconsin. and presented it to the fishing retailer, Thorne Bros. The two friends continued with more media work for musky fishing companies around the midwest, like Shimano.

The opportunity to travel to Fiji “just fell into my lap,” Mavrik says. “If you told me last year that I was going to go to Fiji, I would’ve been like . . . where?”

Shimano had already given Mavrik products to use in his promotional videos in Minnesota. Mavrik realized that if he could obtain products, they could possibly travel to Fiji and film for Shimano.

Shimano used Mavrik’s shots for commercial videos on various social media outlets as well as using them for youtube advertisements.

“To start off with, the suitcase with the lures and my clothes I had, got lost,” Mavrik says, “so I didn’t have any clothes for seven days! I went with the same pair of pants and my buddies were kind enough to lend me some shirts.”

Mavrik says that the trip to Fiji and the Kingdom of Tonga has impacted him on both a business level as well as on a personal level.

“From a business standpoint, it has opened my eyes about how important social media presence is for businesses.”

Mavrik gives thanks to UMD for teaching him how to conduct himself and his work professionally. He got a lot of help from John Kratz, his Principles of Marketing professor at UMD's Labovitz School of Business and Economics. “He helped me negotiate prices, gave me ideas on how to approach interviews, and helped me sell myself to clients,” Mavrik says.

After graduation, Mavrik envisions himself in web development or taking a social media management position. “There’s demand for good content,” he says. “You’ve got to get it right to do advertising for businesses.”

So far, Mavrik is realizing his dream. Besides running a public instagram profile, @mavrikfishing, he is promoting for various tackle manufacturers. He works with Otter Outdoors, Shimano Fishing, Simms, and most recently Phantom Lures. He is also working as website manager for the retailer Thorne Bros.

About the Department of Marketing