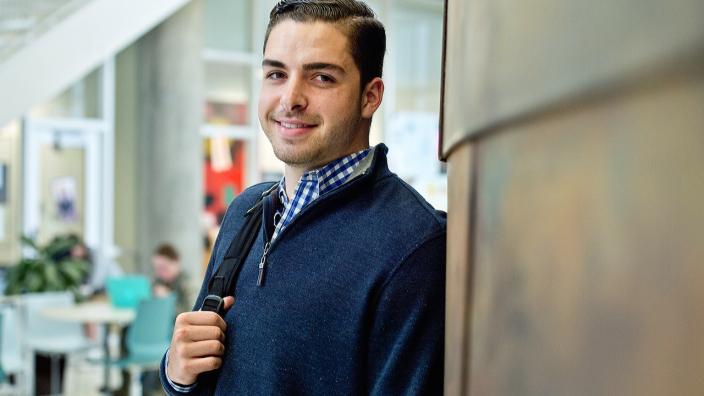 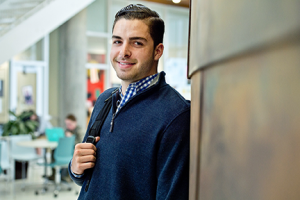 It wasn’t simply a straight shot for Matt Knowles – from classes to career. There were some twists and turns along the way. He even questioned whether UMD was the right fit for him, then he keyed into what UMD could offer him, and he stayed.

He was at the right place at the right time with the right skills. Matt Knowles was a freshman at UMD with an interest in business and a talent for art when the Labovitz School of Business and Economics (LSBE) announced the start of a new program in marketing and graphic design.

Now, after graduating in May, Matt has begun his career in New York City working for Jack Morton, an experiential marketing firm where Matt will be assisting with communication, logistics, coordination, and positioning the best image for his clients.

“I’m starting out on the Cadillac account,” Matt says. His main job will be to assist with current efforts to accelerate the Cadillac brand out of the past and towards its future vision.

But it wasn’t simply a straight shot for Matt – from classes to career. There were some twists and turns along the way. He even questioned whether UMD was the right fit for him, then he keyed into what UMD could offer him, and he stayed.

Plotting a Course
“I knew I wanted business but wasn’t sure what,” he recalls. “I considered going to the U of M Twin Cities after freshman year but then the Marketing and Graphic Design program started. Carlson School of Management didn't offer the same program.”

Growing up in Chaska, Matt enjoyed drawing and storytelling through comics as a teenager, but he didn’t even take an art class until the latter half of his high school career. “I went from intro level assignments to level two in the second week of class,” he says.

Matt describes UMD's Marketing and Graphic Design program as about 60% marketing/40% graphic design. “It’s a nice complement, to think about something visually as well as being able to explain the same strategy verbally.” He points out, “The Graphic Design classes have about 12-15 students. The individual attention you can get is awesome. It’s easier to get that connection with your instructor and the class structure is more open.”

Keys to Success
Once he’d found his program at UMD, Matt identified someone who could give him some guidance. “Matt Olin was a great mentor,” he recalls. Olin is an assistant professor in the School of Fine Art’s Department of Art & Design. “He answered my questions about the advertising and marketing communication industry. He pushed me to do a lot of things, to go outside of my comfort zone. For a class, I designed a thumbprint. He suggested I enter it in the Student Art Show. I hadn’t thought of that. It was accepted.”

Another thing Matt Knowles did was find an internship. “I interned at Flint Group. Matt Olin wrote a great letter of recommendation for me. Interning at Flint was another huge positive step. My learning curve grew exponentially.” He worked on a number of local events including the Kraus-Anderson Bike Duluth Festival. “I was also involved with Hockey Day Minnesota, helping to coordinate with sponsors. That was a lot of fun to plan," he recalls.

Matt also got involved on campus. “My junior year, I was elected president of the newly-formed Marketing and Graphic Design Club. I’d always been a leader in sports so I decided to run for office.”

The club provided him and other members with a lot of opportunities. “We’d do show-and-tell, get feedback on projects, and collaborate. We learned a lot from keynote speakers, and we also attended the Student Advertising Summit in Minneapolis,” Matt says.

Destination in Sight
He has high praise for the program. “It really trains your brain to problem-solve in different ways. You are given a massive tool kit to pick and choose from to solve problems both creatively and strategically. It’s a very unique sphere to be in, derived from the two disciplines.”

Matt points out that the people at Jack Morton were impressed with his dual skill set. “What set me apart was my ability to do whatever they need to do on the strategic and communication end as well as the design and visual concepting. They said that wasn't something they had heard of in a marketing major.”

Visit the LSBE website for more information about the Marketing and Graphic Design program.

The School of Fine Arts (SFA) offers a Graphic Design and Marketing program (about 60% Graphic Design/40% Marketing). Visit the SFA website for information about that program.

School of Fine Arts
Labovitz School of Business and Economics