Flying into his Future

Markus Krings gives us a look at what it’s like to be a full-time UMD and AFROTC student.

Markus is currently a senior at UMD studying Mathematics and Aerospace. He will be graduating in spring 2019 with his bachelor degree and then commission as a second lieutenant. He will then train to become an Air Battle Manager. As an Air Battle Manager, Markus will be similar to an offensive coordinator for the Air Force. He will be placed inside a plane watching computer monitors to talk to pilots and crew.

Markus grew up in Byron, Minnesota and has always had an interest in joining the army. As a kid, he would listen to the stories of his grandfather who is a World War II veteran. Markus said he almost chose to enlist right after high school, however he still wanted a college experience.

With the advice of his family members, Markus said, “If I wanted to serve, but have a good life then the Air Force would be the best option.” Markus took some classes with the ROTC and instantly fell in love with it. Within his second year of college, Markus got a scholarship to fund his ROTC career.

Four days a week, ROTC students wake up early to train. Depending on if you’re a freshman or sophomore, students work out with their cohort on Tuesdays and Wednesdays. On Thursday mornings, students are required to wake up at 6 a.m. to go over military basics and on Fridays, students work out to help them get physically fit. “It’s up to the officers how hard the workouts are, but they’re definitely challenging. We do a lot of long distance running and I grew up playing football and basketball, so I’m not a fan of that,” said Markus. He also mentioned that ROTC students are required to be in uniform on Thursdays to get used to wearing their uniform.

Throughout the four-year ROTC program, students take basic Air Force history and leadership base training classes. Markus mentioned that because he is a senior this year he takes a class on national affairs, which prepares him for active duty after graduation. Markus said he does his best to work the hardest every day, because just like any other job, the Air Force is very competitive. 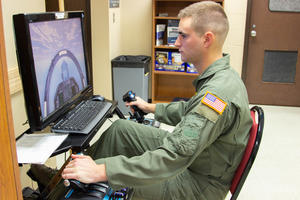 Here is Markus flying on the flight simulator down in the ROTC.

After graduation, Markus was supposed to move to Tyndall Air Force in Panama City, Florida. Unfortunately, when the Hurricane hit in October 2018, the base was wiped out. Markus is now on hold, but has applied to other jobs such as a Gold Bar Recruiter, which is someone who is based in a major city in the U.S. to recruit high school students. Other than waiting to hear back from these jobs, Markus is looking forward to moving back home to relax with his parents.

The biggest thing that Markus has learned from the ROTC is learning how to work in stressful environments. “In field training, there are a thousand things going on, but you have to figure out what to do and how to do it quickly. That’s our job as officers. To make quick and correct decisions,” said Markus.

Markus shared that his main take away from the ROTC are the friends and support. In his words, “Everybody in here is awesome, dedicated and hard working. We all have similar mindsets, yet we’re very diverse. It’s nice to surround yourself with people who want to better themselves and each other. Also, I’ve been soaking up all the knowledge that Lieutenant Colonel Graddy, Major Huber, Captain Shafer, Technical Sergeant Johnson and Staff Sergeant Dixson have shared with me."

His advice to other students? “Always be yourself.”

Wanna learn more about what it’s like for UMD ROTC students like Markus? Go to our UMD Swenson Instagram to see Markus give us a tour of the ROTC and Fieldhouse: https://www.instagram.com/umdswenson/?hl=en