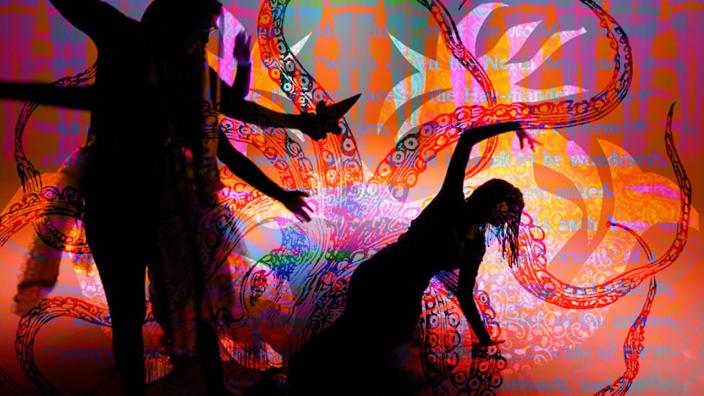 The UMD group gave the performance at Lydgalleriet in Bergen, Norway during ELO 2015: The End(s) of Electronic Literature in August 2015. The part conference, part arts festival featured original artworks of diverse media and showed multimedia artwork that engaged the viewer by merging literary art with interactive technology.

FISHNETSTOCKINGS: The Student Involvement
According to Justin Anderson, a UMD studio art major, "Our event was the show-stopper." The UMD team built a wall-sized screen in a gallery and for the performance, projected non-stop moving images to tell three stories related the Hans Christian Andersen's "Little Mermaid." Audience members were encouraged to join the show. As people got near the screen, their approach triggered visuals and their hand movements made images move on the screen. Posted Tweets from the crowd appeared on the screen to add visual input.

Logan Sales, a UMD computer science graduate student, spent weeks at UMD programing electronic shadow puppets (mermaids, jellyfish, etc.) that would move when someone from the audience moved their hands. They called the process interactive motion detected projections. In Bergen, Logan adjusted the programs he had built to match the movements of people who approached the screen. The best effect? "We wrote a program for Alison Aune's paper cut fishing net," Logan said. "Kids grabbed each end of the net and captured something on the screen."

From Concept to Creation
The lead player in the production was Joellyn Rock, assistant professor, Department of Art and Design. She had the vision and determination to pull dozens of people together create the piece. "The installation offered true digital interactivity and is an example of electronic literature," she said. "That was rewarding, and it opens doors for new work." The audience acted in the story, they changed the story through movement, and they added text. "The sheer volume of physical interaction made the event a success," Joellyn said. "The kids really got it. They jumped in front of the screen and tried things until they made action happen."

Joellyn is proud of more than the performance. "Justin and Logan were amazing," she said. "Pete's guidance and Logan's determination made computer effects that enchanted the audience. All of us worked as a team to collaborate and support each other." The different skills and perspectives of the team came together in the massive project. "I'm really proud of UMD," Joellyn said.

More Visual Arts and Cinema
Joellyn brings her multimedia magic to the opera in December 2015. She has created digital projections for The Magic Flute, to be performed by UMD students on December 4 and 5 at 7:30 pm in the Weber Music Hall.

In addition, Alison and Joellyn have been invited to travel to Aarhus Denmark in March 2016 to share the Fishnetstockings multimedia project and conduct art workshops with youth.

All of the Players
Joellyn was joined by Peter Willemsen, associate professor, Department of Computer Science; Alison Aune, professor, Department of Art and Design;Lisa Fitzpatrick, director, UMD Motion + Media Across Disciplines Lab (MMAD Lab) and Viz Lab; Justin Anderson, a studio art major; and Logan Sales, computer science graduate student. Dozens of people contributed to the production in Duluth, from creating original music, to contributing poetry and other text, making paper cut art, acting in the video performances, and providing technical support. A total of 16 people from Duluth traveled to Bergen, Norway for the event.