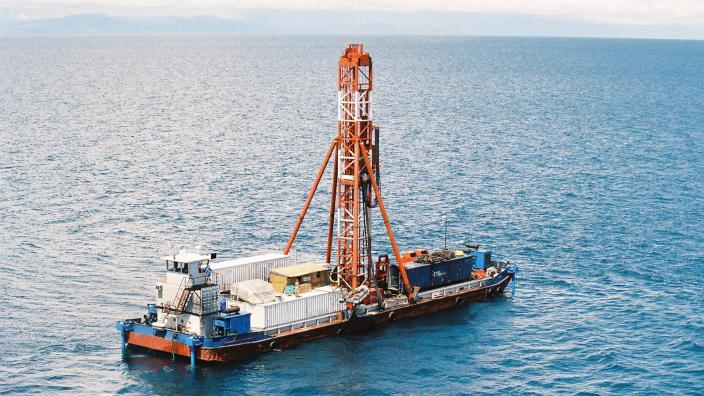 Nature magazine is publishing the results of this research on August 10. UMD Regents Professor Emeritus Thomas Johnson was the principal investigator and worked with Professors Erik Brown and Byron Steinman of UMD’s Large Lakes Observatory and Department of Earth and Environmental Science. They were part of a research team that included scientists from several universities in the U.S., Europe, Africa, Australia and South America.

“From the beginning we had a sense that the results of our efforts would be important,” said Johnson.

22 Years in the Making

The research began in 1994 as this group of scientists proposed drilling into the bottom of Lake Malawi in Africa to collect core samples that would far exceed in length and age anything gathered thus far. In 2005, their proposals became a reality as they converted a fuel barge into a drilling vessel that would remain on the lake several miles from shore for 35 days and use oil industry technology to collect a 380 meter long sediment core, providing a 1.3 million year record of the African climate.

“This is the longest climate record available from an inland African lake,” said Brown. “And much to our surprise it revealed information that conflicted with the theory that Africa has been getting drier over time, also known as the ‘savanna hypothesis’.”

Lake Malawi is a tropical lake that is as long as Lake Superior and is 700 meters deep. It is bordered by Malawi, Mozambique and Tanzania. Analysis of the Lake Malawi sediment record shows the climate in this region getting progressively wetter over time. In fact, this part of Africa goes through a wet and dry cycle every 100,000 years in step with the coming and going of major ice ages. This greater level of understanding of the African climate could impact human evolution theories focused on the idea that as the terrain in Africa changed, early species of humans migrated or evolved to adapt to their environment.

“This makes the story of human evolution a little more complex than it used to be,” said Johnson. “It’s very important to the paleoanthropology community as it sheds new light on the actual conditions that were present centuries ago in tropical East Africa.”

Analyzing was the Hard Part

The process of collecting the sediment core was a major challenge for the research team, but analyzing the samples for past climate conditions and creating a timeline based on the different layers provided additional challenges. Radiocarbon dating only works for deposits that are less than 50,000 years old and the vast majority of the core was much older.

“We used volcanic ash layers and magnetic polarity reversals to date the older part of the sediment record.  Organic compounds derived from single-celled Archaea  provided a record of past temperature, while calcium carbonate levels and organic molecules derived from terrestrial leaf waxes painted a picture of past rainfall over time,” said Brown.

The Nature magazine article is titled: A progressively wetter climate in southern East Africa over the past 1.3 million years.