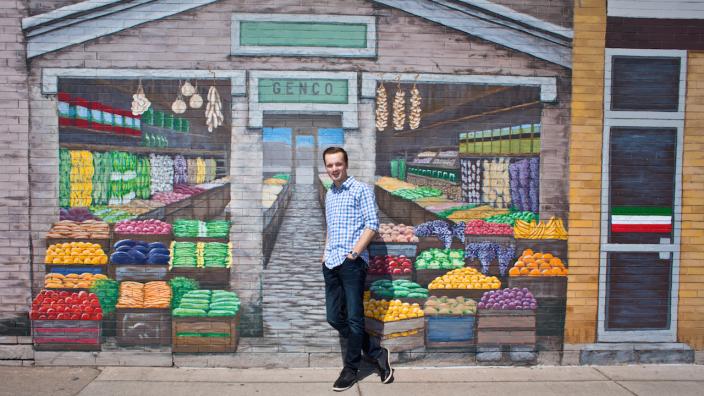 The elaborate mural of intertwined grapevines framing the painted streets of Italy caught the attention of Kevin Ott. The vibrant purples and greens that sprung from the facade of Gannucci's Italian Market lured Kevin into the building. He was hunting to find the painter behind the masterpiece. Little did he know, this would be the inspiration for his class assignment and the rest of his journalism career. “When I went into the market, I realized all the walls on the inside were covered in murals,” says Ott. “Right away, I knew this was something I wanted to write about.”

Kevin contacted the painter, Tom Napoli, and set up an interview. “We met at Superior Wine Beginnings, and he answered my questions, all while painting on the building,” says Ott. “He doesn’t plan anything,” says Kevin. “Tom just has a vision and runs with it.” Kevin knew this type of art was a novelty in the area and wanted to capitalize on it. “Paintings like that are rare in Duluth, and it was worth some attention,” he says.

Kevin Ott is a journalism student at UMD, and this encounter made his passion for writing about Duluth stronger than ever. “Telling stories of ordinary people doing extraordinary things in the community is what I love about journalism,” he says.

Kevin originally came to UMD hoping to be a sports writer, but after taking the class Community and Journalism, he was curious about other reporting opportunities. “I learned to appreciate journalism for more than just sports,” he says.

Awards
This spring, Kevin has been awarded two scholarships for his upcoming senior year. Both the Larry Oakes Scholarship and the Nordin Memorial Scholarship are given to outstanding journalism students who are actively working for the UMD Statesman and other news organizations. Kevin is currently the editor of the Statesman and is the incoming editor-and-chief for the spring of 2018. “As a journalism student, it is extremely important to work for the campus newspaper,” he says.

Kevin has also written articles for Lakevoice, a class-sponsored enewsletter. “I’m taking advantage of every opportunity to gain experience and to become a better reporter. It will make me more valuable in the job market after graduation.”

The scholarships are not the only awards he has received this spring. Kevin was awarded a competitive internship to write for the Washington Island Observer in Washington Island, Wisconsin. This is an eight-week, onsite internship that was granted to Kevin by the International Society of Weekly Newspaper Editors.

Applicants were given the choice of eight news organizations around the U.S. and asked to rank them in the order of desired locations. Kevin was awarded his first choice and will head to Washington Island this June. “I’m excited to break into a brand new community and serve the people by telling their stories.”

Kevin will also intern at the the Duluth News Tribune next semester. “Loving the place that you’re in makes writing about it a lot easier,” he says.

About the Department of Communication