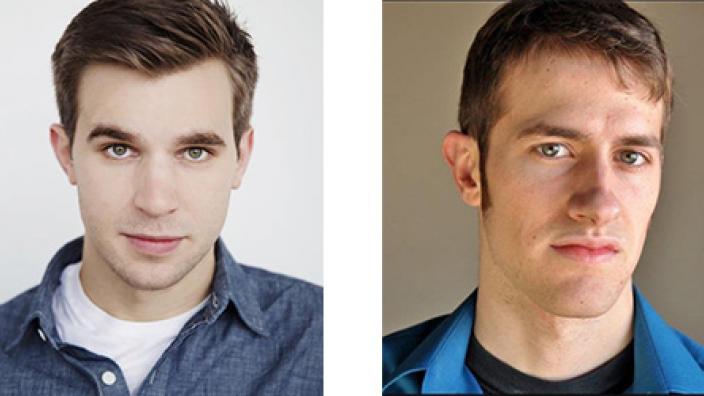 In our Theatre program we offer a variety of opportunities for all of our students, and one of those is participating in KCACTF. This year our very own Jayson Speters (pictured left) and Erik Meixelsperger (pictured right) will be headed to the National Festival in April.  Jayson Speters won the Irene Ryan First Place Award for the Region and is now going to Washington DC in April with his partner Kayla Peters to compete against the top actors from the other 7 regions from across the United States for the number one spot in the nation. Erik Meixelsperger's play Fish Bowl was selected as one of the four National Finalists for the Gary Garrison Ten Minute Play Award.

Started in 1969 by Roger L. Stevens, the Kennedy Center's founding chairman, the Kennedy Center American College Theater Festival (KCACTF) is a national theater program involving 18,000 students from colleges and universities nationwide which has served as a catalyst in improving the quality of college theater in the United States. The KCACTF has grown into a network of more than 600 academic institutions throughout the country, where theater departments and student artists showcase their work and receive outside assessment by KCACTF respondents.

The goals of the Kennedy Center American College Theater Festival are:

Through state, regional, and national festivals, KCACTF participants celebrate the creative process, see one another's work, and share experiences and insights within the community of theater artists. The KCACTF honors excellence of overall production and offers student artists individual recognition through awards and scholarships in playwriting, acting, criticism, directing, and design.

KCACTF is a year-round program in eight geographic regions in the United States. Regional activities are coordinated through eight KCACTF regional chairs and eight KCACTF playwriting awards chairs. With funding and administrative support from the Kennedy Center, the regional chair coordinates with the Co-Managers of KCACTF all aspects of the adjudication of productions on the local and regional level and supervises regional-level KCACTF award competitions. The playwriting chair works with schools that have entered new and student-written plays by providing expertise in the development of new scripts--assessment specifically designed for a developing play--and by providing information on the numerous playwriting awards offered.

In January and February of each year, regional festivals showcase the finest of each region's entered productions and offer a variety of activities, including workshops, symposia, and regional-level award programs.

Since its inception, KCACTF has given more than 400,000 college theater students the opportunity to have their work critiqued, improve their dramatic skills and receive national recognition for excellence. More than 16 million theatergoers have attended approximately 10,000 festival productions nationwide.