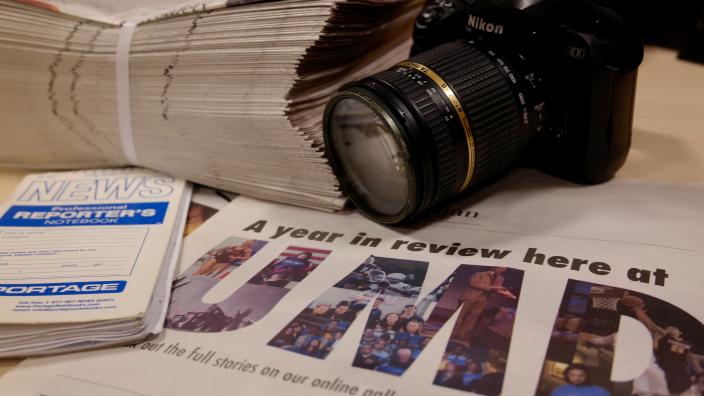 The Statesman, UMD’s student newspaper, has served close to 84 years informing the students and faculty as to what is happening on campus. The newspaper, whose staff is made of solely of students, have carried the name well into the 21st Century.

Now those students have a new opportunity. UMD has announced that Journalism will be a new major.

Finding a new home under the Communications Department, the new major has both students and faculty excited.

“Response has been great already -- from returning students and from incoming students,” said Chris Julin, journalism instructor. “The Department of Communication has been terrific about welcoming the Journalism faculty. It's a good home for us.”

Given Duluth’s size, the opportunities for Bulldog journalists working as interns are endless. Duluth has  three major news stations, a major newspaper dating from 1869, multiple newspapers, magazines, and community blogs.

Students in the department couldn’t be more excited.

“Being able to be a part of the new major feels special,” said Kahla Statema, a journalism major.

Other students have found a sense of place among the student body.

The classes offered in the new major have expanded, ranging from writing to social media strategies. This gives the students the tools to work not just in the field of traditional journalism but also allows them to adapt to the diverse media landscape. The new focus lends pride to the students in the opportunities the major presents.

“It makes me proud to be a part of the program, and lends credibility to what I'm doing with my journalistic skills,” Eric said.