Reflections from a Leadership Trip 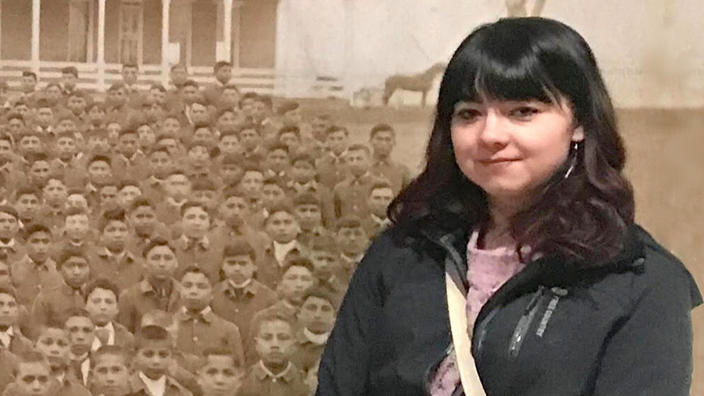 My name is Meaghan O’Connor. Several days ago, I stood on the same ground where my great-great grandmother, Catherine Lemieux, stood in 1914, at the Carlisle Industrial Indian Boarding School in Pennsylvania. I think of her when she was a teenager, sent away from her home and family at Fond du Lac, Minn., traveling on a train for days. It was the nation’s first Indian Boarding School and it would be the model for 45 more in the country. Here, between 1879 and 1918, lived more than 10,000 Native American children from more than 140 tribes. In all, less than 200 children graduated. The whole idea of boarding schools is terribly sad, because its purpose was assimilation. 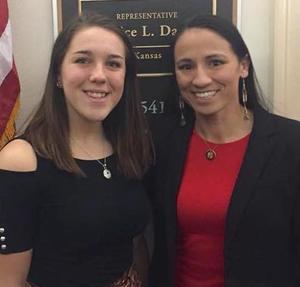 There were 22 of us, from the University of Minnesota Duluth, the College of St. Scholastica, and one from the University of Minnesota-Twin Cities. We traveled on a January trip to Washington D.C. and to Carlisle. We witnessed unspeakable atrocities at the U.S. Holocaust Memorial Museum and paid our respects at Arlington National Cemetery. The Native American art at Chicago’s Field Museum, with its bead work, towering totems, and contemporary art, was breathtakingly exquisite. It was a leadership trip and we were meant to reflect on history and prepare for things to come. Our emotions ran high but none of us predicted the optimism we would feel at the U.S. Capitol. 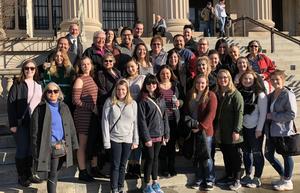 The group from the University of Minnesota Duluth and the College of St. Scholastica visited sites in Washington, D.C. and other places in January 2019.

My name is Mary Schwend and I’m proud and grateful to tell you about meeting Deb Haaland and Sharice Davids. We met them just days after they were sworn in as the first Native Americans to serve as U.S. congresswomen. We crowded into Deb’s office and I was overcome with the feeling that she was representing me. For the first time I felt that someone was representing my heritage, my people… our people.

Next, we visited Sharice. Again we filled her office and she asked us to go around the room and tell us about ourselves. We called out our tribal affiliations, Bad River, Red Cliff, Fond du Lac, Tlingit, and many more. These two powerful legislators have strong fresh voices and are standing up for 5.2 million American Indian and Alaskan Natives. They broke into one of the highest political arenas in the world and that makes me full of hope for the positive changes to come.

As for us, we are more determined than ever to becoming true leaders.

Meaghan O’Connor is an University of Minnesota Duluth student from Duluth, Minn. She is majoring in communication sciences and disorders with a minor in American Indian studies. She is a descendant of Fond du Lac Band of Lake Superior Chippewa. Mary Schwend is a College of St. Scholastica pre-med student, majoring in biology. She is from Winona, Minn. and is a member of the Sault Ste. Marie Tribe of Chippewa Indians.