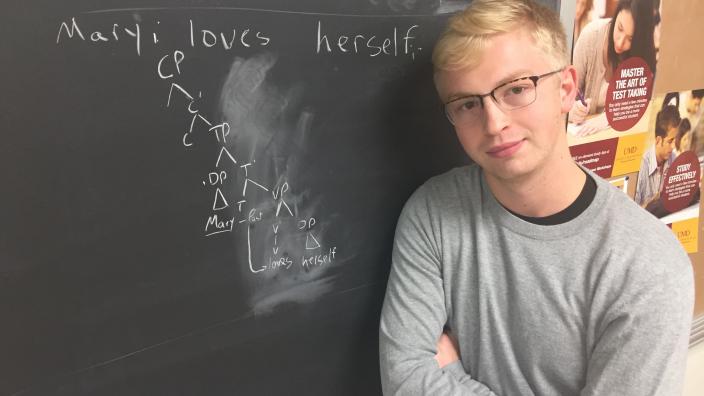 Trevor Winger is on a quest to understand language.

Trevor Winger, a UMD junior, pushes the door open and squints as his eyes adjust to the light. A woman across the room waves at him. He hears a jukebox playing in the background and he smiles. He places his audio recorder on the tall table and he takes a seat on a wooden stool.

“Hi, I’m Trevor,” are his first words. “I messaged you on Facebook.” They eat pizza and talk for four hours and at the end of their chat, he hands her a Walmart gift certificate.

Trevor is researching the way people on the Iron Range of Minnesota speak. He finds people on Facebook to interview and trades a gift certificate for the opportunity to talk with them. “I invite the people I interview to talk about anything they want. I never know what to expect,” he says.

After the interview, he transcribes the conversation. He says the research is intriguing and fun. “To understand language is to understand what it means to be human, and that is really cool,” he says.

Trevor grew up on the Iron Range. He’s a Mountain Iron native with no less than four majors: linguistics, philosophy, cognitive science and computer science.

Words in the Mix

Located in northern Minnesota, the Iron Range was known as a melting pot at the beginning of the 20th-Century. Immigrants from Italy, Croatia, Ireland, Slovenia, Serbia, Finland, and Sweden found work in the iron mines. The area was isolated from the rest of the Midwest and people from all different backgrounds formed strong communities. As a result, generations learned speech that has slight differences from the rest of the country.

Trevor explains that people involved in present-day conversations on the Iron Range still use unique forms of speech. He’s documenting it all with detailed transcriptions and analysis. Trevor's project is part of a larger research endeavor conducted by Associate Professor Chongwon Park in the Department of English, Linguistics, and Writing Studies and funded by UMD. Trevor also has an independent study with Associate Professor Will Salmon.

People across the country can recognize the Northern Minnesota accent. "The Range" comes out "da Raynch." Words get a different pronunciation: "about" becomes "aboot,” "creek" becomes “crick,” “three" becomes “tree,” and dozens of other words have alternate sounds.

Trevor isn't looking at accents though. First of all, he is collecting a large volume of data to use in his work and also for future linguists to study. His real interest is when Rangers use reflexive pronouns such as “himself” or “herself.”

Reflexive pronouns are used when the subject and the object refer to the same person or thing. Here's an example of a common simple sentence that uses a reflexive pronoun, "She bought a present for herself."

The intriguing parts of Iron Range speech come when there is a long-distance reflexive in a sentence. Consider the questionnaire Trevor developed, "Matt believes in John, and John knows it! To describe the situation, could you say, 'John knows that Matt believes in himself?' People who are participating in the survey rate variations of sentences like this one a scale of "ungrammatical" to "perfectly acceptable."

Trevor is open minded about the project. "I hope to collect the data and see if said trait can be interpreted in a different more pragmatic way for understanding this structural 'phenomena', if it does exist," he says.

Trevor will graduate in May 2019 and is looking forward to studying pragmatics or cognitive linguistics in graduate school. "I hope to publish my research on Iron Range speech and use it as a writing sample for graduate school applications," he says.

About the Department of English, Linguistics and Writing Studies