On the Front Line of the Invasion 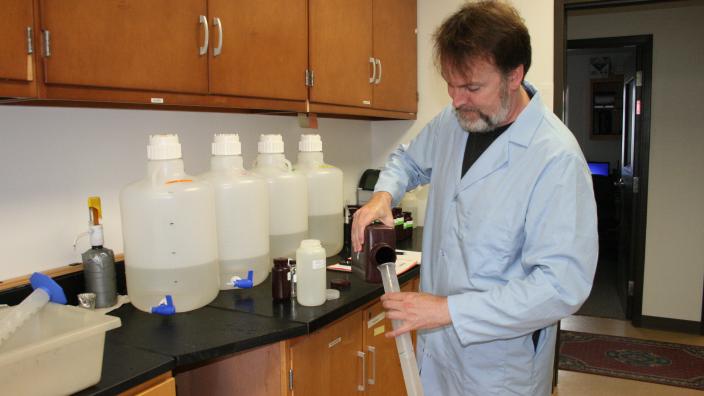 NRRI collaborates to reduce invasive species in the Great Lakes

Duluth-Superior Harbor, at the most pristine end of the Great Lakes, is the freshwater port most heavily invaded with non-native species. It’s easy to understand why. Duluth- Superior is often the last stop on international routes and ballast water from all over the globe gets emptied there so ships can reload.

It's a one-way ticket for unwelcome guests that can wreak havoc on the locals.

NRRI expertise in understanding the tiniest of freshwater organisms is being applied on a large, collaborative project to curtail ballast-mediated invasions. NRRI Scientist Euan Reavie, an expert in aquatic microorganisms, is one of the lead researchers for the Great Ships Initiative, a project of the Northeast- Midwest Institute, housed in a facility in Superior, Wisc.

The Initiative is working to resolve the problem of ballast hitchhiking species in the Great Lakes as quickly, effectively and economically as possible, within regulatory guidelines. In December, the researchers released a report on their study of the effectiveness of eight commercially available ballast filter systems.

"Ships will be required to have validated treatment systems," explained Reavie. "And we're the only freshwater facility that can test these candidate systems."

The land-based testing facility pulls in water from the harbor at 340 cubic meters per hour and sends it through filter systems provided by different manufacturers. Stringent information was collected on both ends — input and output. Filter company participation was important to the study and to provide transparency to their customers, the ship owners.

"It was the ship owners who expressed initial concern because they basically have to 'shop in the dark' when they're purchasing filter systems," explained the Initiative's Principal Investigator, Allegra Cangelosi. "They don't know what they can expect from the systems."

The Initiative held a webinar to coincide with their released report on the performance of the filter systems. Each vendor also received a complete analysis of their specific filter product. The researchers found that all filters functioned effectively, but none achieved the federal ballast water discharge standard of 10 microorganisms per milliliter of water. Reavie is also leading a study to discern whether or not 10 is the right number per milliliter to prevent future invasions, though it's still a tremendous improvement over 1,000 to 2,000 before the filtering.

"Some people want to see zero organisms in the ballast," Reavie said. "But the lower the number, the more difficult it is to confirm scientifically. For instance, if we wanted to test for one cell per milliliter, we'd have to analyze 10 times as many samples."

The researchers didn't go into this project expecting one filter to completely eradicate organisms in ballast water. They will continue research on other filter systems that include complementary techniques like ultraviolet light and chemical treatments such as chlorine and ozone to reach the mandated standard.

"The harbor has incredible organism diversity and that really challenges the systems," Reavie added. "But while complicated, we were able to simulate what a ship might experience elsewhere."

In 2015, the researchers will test systems on the ships themselves, travelling to China, the Netherlands and California. For more information visit www.greatshipsinitiative.org.