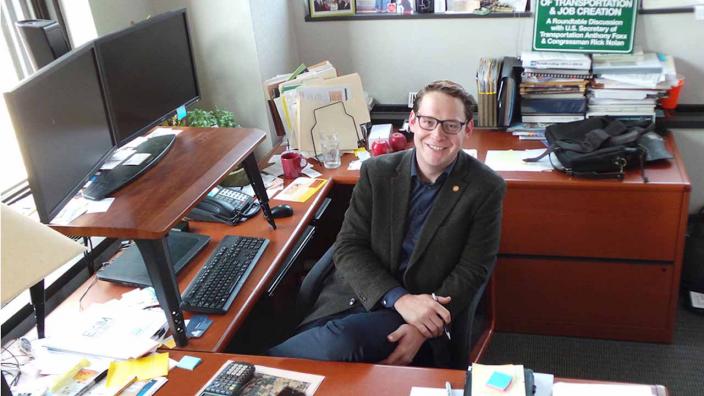 Ian Vincent ’12 is the youngest person sitting at a large wooden table at the Kitchi Gammi Club in Duluth. The group is surrounded by carved woodwork, stained glass, and antiques. Outside the window, a stone’s throw away, Lake Superior’s water ripples in the sunlight.

Top executives, legislators, and community leaders have gathered with one topic in mind, the economy of northeast Minnesota and northwest Wisconsin.

All eyes are on Ian as he explains the research he has been gathering for APEX, an economic development firm, and NORTHFORCE, a workforce development initiative that works to attract, place, manage, enrich, and retain talented people in Duluth and the surrounding area. His suggestions surprise many. “We all know we need to keep young, talented people in the city,” he says. “To do that, simple organizational policies that have been in place for decades need to change." 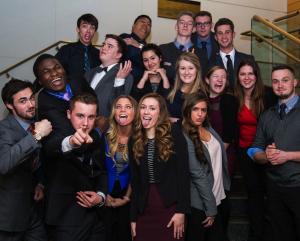 Labovitz School of Business and Economics students, with help from UMD alumni, pulled off another well-attended UMD Entrepreneurship Conference.

According to Ian, the words, “years of experience” on a resume can deter companies from hiring the brightest and best. “Companies mean well, but concentrating on a candidate’s growth potential and ability to adapt will get them an equally skilled and more committed worker.”

Keeping talented college and university grads from leaving town is high on Ian’s priority list. “Who will be more loyal?” he asks the group. “The employee who has years of experience with a company somewhere else or the employee who demonstrated leadership, excelled in college, and was trained in your company values, vision, and goals?”

Ian has one more recommendation, "Stay connected to flourishing talent," he says. That's why Ian and other young professionals network and volunteer at area colleges and universities and assist with events such as UMD's recent Entrepreneurship Conference.

Ian is a senior business developer for APEX and marketing coordinator for NORTHFORCE, and he throws himself into the work. Yet, there’s another side to his life; and it involves film, music, and entertainment.

It all started at UMD. Hitting the books in the accounting program at UMD “was rigorous, to say the least,” Ian says. He chose an unusual, creative way to take a break from studying. He brought music concerts to unique venues.

He held events at UMD’s planetarium, the aquarium in downtown Duluth, and on the Glensheen Historic Estate lawn, long before Glensheen initiated their summer concert series. Ian brought in psychedelic and heavy-rock bands from around the world to play Duluth for the first time. Bands such as Moonstone (Minneapolis), The Unit Breed (California), and Suishou No Fune (Japan). "These events were a major highlight of my life," he says. "I also learned plenty about the business side of event planning and negotiations."

Now he's less of an organizer and more of a participant. "The art's scene is awesome," he says. "Events in Duluth are diverse, high quality, and frequent."

Ian currently plays drums in a local psychedelic rock band called Heaven’s Gate Away Team. He has a fluffy white cat and a "lovely girlfriend" of seven years, Katie Johanson, who works at the Minnesota Public Radio Duluth office. They met in the Kirby Lounge.

Ian, Duluth, and UMD have a long history together. Ian grew up in a Twin Cities suburb but he has family in Duluth, including cousins and a 91-year-old grandfather. And, with friends also attending UMD, the choice to study in Duluth was simple.

When he graduated from the Labovitz School, encouraged by the director of UMD MBA programs, Al Roline, he took off to Grenoble, France. He did well in another rigorous program, the International Business and Marketing program in the Grenoble Graduate School of Business. He also studied French and made a wealth new friends from around the world.

It was when he returned to Duluth that something clicked. Breweries and recreation venues were cropping up. Duluth was becoming a mecca for inspiration and creativity; and there were new, young political leaders making changes. He was especially impressed with the Zeitgeist arts complex opening in downtown Duluth.

"There was progress everywhere," Ian says. "That's when I realized I wouldn't want to live anywhere else."

Ian's career feeds his enthusiasm. "Now with my position at APEX and NORTHFORCE, I get to help others make the same choice I made," he says. "This is THE PLACE to work and live."