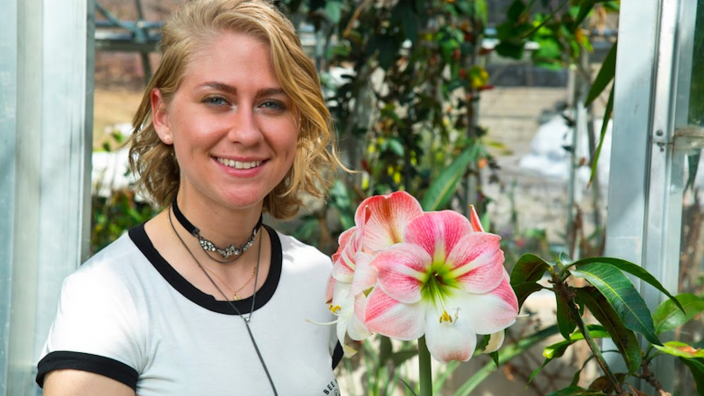 Rachel Hopwood takes her father’s hand, and they walk along the path. The botanical garden is bright with color. She hesitates when she sees a couple of bees bobbing in and out between the leaves. She has been stung before. She stops when she sees a few more nestling in the flowers.

Her father reaches out his hand and while the bee is feeding on nectar, her father touches the bee lightly and pets it.

“It’s your turn, Rachel. Make sure it has its back to you.” Ever so gently, Rachel stretches her finger out and strokes its fuzzy back.

Rachel never forgot the first time she touched a bee, and she never forget what her father taught her about how valuable bees are to the ecosystem.

Double majoring in international studies and environmental studies, Rachel is passionate about protecting and supporting local pollinators and determined to drive UMD towards making a pledge to stand by this cause.

The move for UMD to make this pledge began when Rachel and Mike Purtell, a recent graduate of UMD, joined forces. Rachel was involved in the on-campus club, Minnesota Private Interest Group (MPRG) as an environmental intern. She switched between holding the position of the social justice task leader and environmental justice task force leader.

“Our school should get involved because this is a big issue,” says Rachel. “We like to promote that we’re a sustainable campus, so supporting this cause would be another feather in our cap.”

Rachel, a senior from Fridley, Minn., started campaigning for UMD to take the pledge. She made posters, added information to dining tables, created events, staffed an informational table on the topic. She also attended conventions to learn more about the effort. “I took this one as a personal passion project to try to get UMD to be more pollinator friendly,” says Rachel.

Rachel urges the community and the university to move towards more sustainable practices.  “Bees are dying at an alarming rate,” she says. In fact, in 2017, bees were added to the endangered species list. Rachel explains that neonicotinoids (a type of insecticide) are detrimental to pollinators.

Some ways that the general community can help are by planting milkweed and similar plants, planting native wildflowers specific for this region that’ll help local insects, and refraining from spraying lawns with weed killers, especially during dandelion season.

“If plants and fruit aren’t pollinated we aren’t going to be able to produce proper food,” says Rachel. It’s serious. U.S. National Agricultural Statistics show a honey bee decline from about 6 million hives in 1947 to 2.4 million hives in 2008, a 60 percent reduction.

Hopeful for an Impact

Rachel believes that this pledge will bring UMD into the spotlight. “By taking this pledge, UMD could proudly state that they have made an official commitment to limit the use of chemicals on their grounds,” she says.

Rachel goes one step further. She is looking for work in the sustainability field. “By following this passion project, I found my career path.”