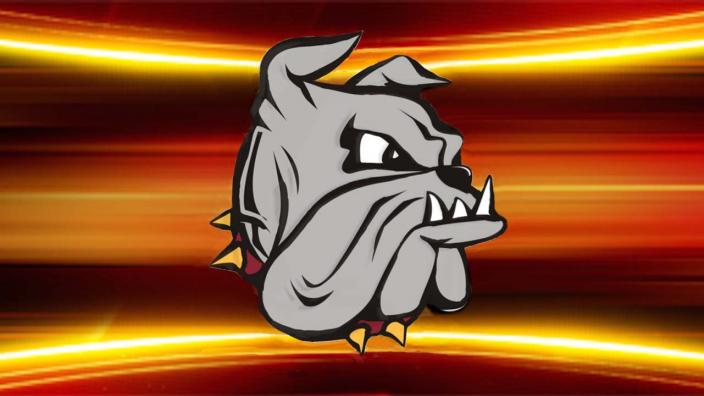 Dominic Toninato and Carson Soucy bypassed the breakaway to set up the play. 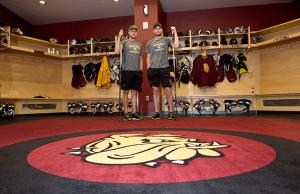 Waiting is not easy in hockey. It's the kind of game that can completely change in the last few minutes, so there’s a constant feel of urgency; during the national anthem skates discreetly slide front to back, penalty box sentences are passed scratching at the gate, and benched players wait for their shift saddling the wall like bull riders.

Countering this, two Bulldogs poised to launch are choosing to wait. When faced with the biggest decision of their lives, Dominic Toninato and Carson Soucy bypassed the breakaway to set up the play.

Dominic, a center, and Carson, a defenseman, both grew up playing hockey. "That's where the love and passion comes from," says Dominic, who dreamed of becoming a Bulldog while skating on Duluth's neighborhood rinks. "Obviously when you're a kid you have your dreams and UMD was top of my list for playing college hockey. I've been lucky enough to make it this far."

Carson, from Irma, Alberta, joined Dominic and an impressive Bulldog roster in 2013.

Hockey scouts have been scooping them out since their first faceoff, but this didn't sway their focus. "You're worried about helping your team win the game, first of all," Carson explains. He caught the eye of the Minnesota Wild and was selected three years ago in the fifth round of the National Hockey League draft. Dominic was chosen in 2012 by the Toronto Maple Leafs, also in the fifth round.

But the question of when they would make the collegiate to pro leap remained under review.

Hockey is all about setting up and executing the play. Strategic thinking has to keep time with 60 minutes of fast-moving factors.

When the Bulldog's 2015–16 season wrapped up, Dominic and Carson had to tap into this mindset for their next move. Carson relied on his base for guidance. "It's a lot of phone calls with your parents, talking with coaches. It's not an easy decision."

"The NHL team talks about a contract, what they have for you," explains Dominic. "You have to make a decision if you want to accept the offer. If you accept, you lose all NCAA eligibility."

Two options with very different reverberations. Staying at UMD would allow them to finish their collegiate careers, but was it worth pausing the pro opportunity? 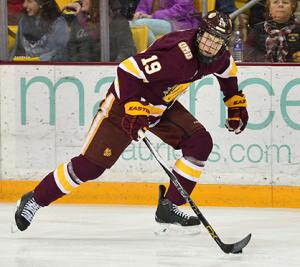 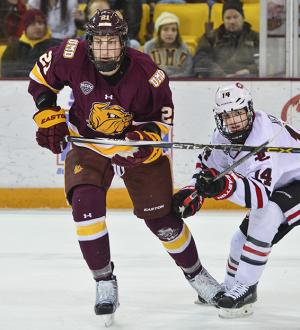 Dominic and Carson weren't the only Bulldogs reconciling their hockey future. Their goalie, Kasimir Kaskisuo, announced he'd forgo his final two seasons in Duluth to play for the Toronto Maple Leafs. But Carson says the empty net wasn't an influence. "The biggest impact for me was the guys who were staying, not so much the one that left. The amount of guys that are coming back and the team we're going to have– we have an amazing group."

Not only are Carson and Dominic teammates, they're also roommates along with forward Alex Iafallo, making for a tightly connected roster.

Then there's the reality of a game where getting crushed into the boards is all in a night's work. "Obviously you can't play hockey your whole life. You could get hurt and never play again," says Dominic, who, along with Carson, is an organizational management major. "Having that degree is huge and can really help with future jobs."

Plus, the Bulldogs agree they have some unfinished business going into the 2016–17 season. They had a tough loss in the regional championship two years in a row. "It stinks loosing that same game twice, so we want to come back and have another crack at it," Carson says. 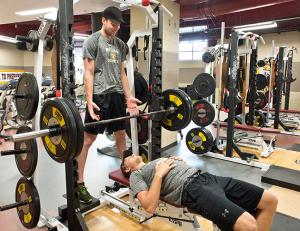 Dominic mulled things around for a week, Carson two days. He says, "Ultimately you have to think about what's best for you and your career." For both, it was returning to Amsoil Arena for one more season.

They say they're looking forward to coming back and leading a program that means so much to them while growing their game.

Their senior year will end with an unprecedented appearance at Amsoil, one that doesn't involve pads or pucks but rather caps and gowns. "It's a different kind of big deal," says Carson. "You're playing hockey all the time and now you're getting recognized for something else. You went through four years of school, and you got a degree and a diploma. I'll definitely be excited at graduation."

It's a strong finish for two Bulldogs who opted for the home ice advantage.