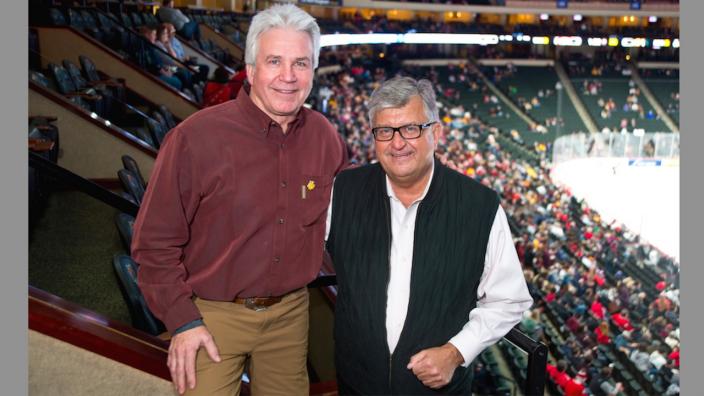 The Bulldog Hockey Locker Project is inspiring former players to remember their years on UMD ice.

Former Bulldog hockey player Merv Kiryluik (above right with Mike Newton) has a vivid memory of his first few hours on the UMD campus, back in 1970. He will never forget what his mother said to him that day.

The family had traveled down from Dauphin, Manitoba, straight north of Bismarck, North Dakota. The trip was long, and the car was full. Merv’s mom and dad, his two younger brothers, and his younger sister all made the journey. Merv was just a few weeks shy of his 18th birthday but he had already done some traveling, mostly to games with his high school hockey team.

“My dad pulled the car into the parking lot between Vermillion and Burnside Halls,” Merv says. “Our car had a trunk so big it could hold the trunk locker I packed with all my belongings.” The whole family rolled the trunk down the hall into Merv’s room. Merv’s mom stayed by his side. “I think she knew I’d never come home to live again.”

The family met Merv’s roommate, another Canadian hockey player, and they talked of opportunities the two young men had received. “I had a guaranteed partial scholarship, and it would turn into a full scholarship if I made the hockey team,” Merv says. On the way back to the car, Merv’s mom pulled him aside.

“My mom made me promise that I would never forget the people who had done so much for me,” Merv says. “She said that a lot of people would help me in my life and I had to pay that back, not exactly to them, but some how, and in some way.” 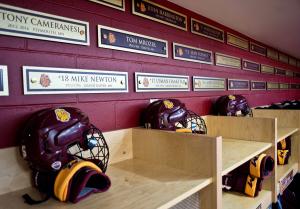 Forty-seven years later Merv is honoring that promise. Merv and his teammate Mike Newton are sponsoring three lockers in the Amsoil Arena Hockey Locker Project. One is for Merv, one is for Mike, and the third is to honor their friend and teammate Lyman Haakstad, who has passed away. Those three plaques, inscribed with their jersey numbers 16, 17, and 18, hang together on the wall of the men's locker room.

“The three of us were a line,” Merv says. Their power plays turned games, and the team started winning. On the ice and off, “we enjoyed the camaraderie.”

Merv can’t say enough about how the team was supported. Faculty members, such as Jackson Huntley, were mentors to the players.

“We weren’t able to go home for Thanksgiving and sometimes even Christmas, so Duluth families hosted us for dinners and visits,” he said. One of those hosts was Marge Knutson, the mother of Merv’s classmate Tom "Dukes" Knutson. “They had a big family and always made us feel welcome,” says Merv.

“Mrs. Knutson was the placement director at UMD,” Merv says. “She arranged an interview for me with the accounting firm, Larson Allen.” The interview led to a job offer, and Merv stayed with the firm until his recent retirement after 40 years. “When I joined the firm, there were 40 people, now under the new name Clifton Larson Allen, there are about 4,500 people. The company ranks in the top 10 accounting firms in the country.”

Friends, a job, and a welcoming community, what more could one want? “I met my wife, Nancy, at UMD,” Merv says. Over the years, Nancy has been a great support. The couple now live in Naples, Florida.

Trips to Minnesota have been a constant part of Merv's life. He stayed involved by recruiting young accountants from UMD for his CPA firm. "We hired many graduates from UMD," Merv says. "They are scattered around the United States working for the firm in various offices."

Looking back and remembering his time at UMD is a pleasure for Merv. “There were guys who came before me that we looked up to...  Keith ‘Huffer’ Christianson, Bruce McLeod, and Pat Francisco... also Cameron Fryer, Walt Ledingham and Murray Keogan.” Merv has stayed in touch with many of his teammates. Craig Arvidson, Scott Koidahl, and Merv endowed a men's hockey scholarship in honor of Lloyd Dedon, the team dentist and friend.

“I’m happy I can give back to UMD,” said Merv. “It’s a small way to honor the people who were kind to me.” He also appreciates the way the Hockey Locker Project allows past players support current players.

There are nearly 50 plaques up already, and room for more. “It’s inspiring to see the names of so many who played UMD hockey, some who have been very successful,” says Merv.

"Many of the people I met at UMD are lifelong friends," Merv says. "To this day, I am humbled by the gifts and friendships made by the people of UMD and the Duluth community. I wish I could mention all of them by name."

The Locker Project is also in place for Women's Hockey and all Bulldog athletic programs. To learn more about connecting the past history of UMD players with present and future Bulldogs through the Locker Projects, contact Gary Holquist at 218-726-6185 and gholquis@d.umn.edu.