Madison Ehnes is a senior in the College of Education, majoring in both Teaching Mathematics and Mathematics. She returned from her first deployment in an undisclosed location in Southeast Asia, just before school started this year.

Madison was born and raised in Duluth, Minnesota and that is why she chose to attend UMD, because it allowed her to “stay close to my family and friends.” She is currently in the 148th Air National Guard working in aircraft maintenance.

“I was honored and a little shocked to see I received the scholarship. I was not expecting it! The scholarship means so much for me. It is an amazing opportunity.” 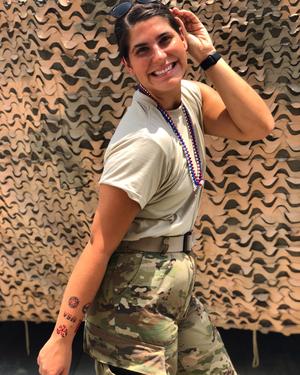 The Commander David R Wheat Higher Education Returns Opportunities Scholarship (H.E.R.O.S.) provides students who are veterans, in active duty, a member of the National Guard, or Reservists with academic scholarships or fellowships.

Commander David R Wheat is a UMD alumnus and was a Radio Intercept Officer who had completed 80 strong and successful missions. In October of 1965, his jet was shot down over North Vietnam, he was kidnapped and held hostage for seven years and four months. He endured severe torture and was held in isolation. The scholarship has been named after Wheat for his bravery and courage during a very difficult time in his life.

She finds Commander Wheat to be an inspiration. She hopes to “become a pilot like he was,” pointing out his qualities of courage and bravery as some she hopes to acquire as well.

Madison is grateful for the H.E.R.O. Scholarship. “Before I joined the military, I went to school with no financial assistance other than my own, and I still struggle with student debt from private loans, so I know how blessed I am to have been chosen for this scholarship.”

Looking into the Future

Madison is very goal oriented. Her future goals are to “come back for my graduate degree in mathematics, to become a high school teacher or a professor.” She is very eager to try new things and explore more of the world around her.

She aims to “hike every national park in the United States, learn to play the guitar, and take some strokes off my golf game,” in her free time.

To learn more about the David R Wheat H.E.R.O Scholarship and find the application, visit onestop.d.umn.edu/veterans/financial-aid.