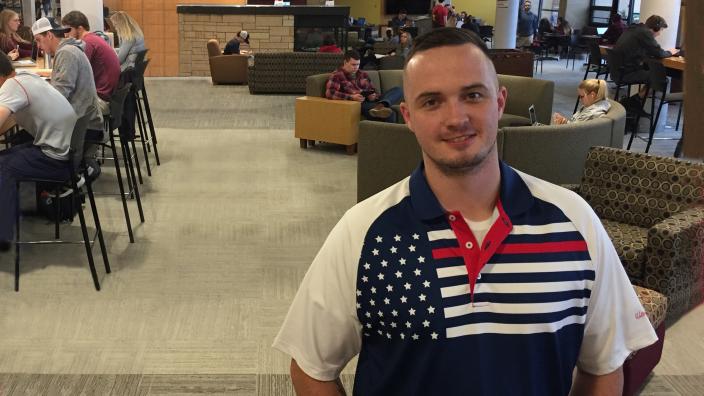 This story is about two men. Both of them are Navy men and both have ties to the education department at UMD. Both care about helping others, and both are dedicated to serving their country. They are David R. Wheat and Nathan Ernst.

UMD alumnus David Wheat ‘63, a Navy radar intercept officer, was imprisoned in Vietnam’s Hoa Lo Prison in 1965 after the jet aircraft he was in was shot down. David was taken prisoner and endured seven years and four months before his release, one of the longest Prisoner of War (POW) terms on record.

UMD student Nathan Ernst is a Navy Yeoman in the United States Navy Reserve. Nathan has already served over five years in the Navy, in service one weekend a month with an annual week-long commitment. "It's over 50 days, a large part of my year," says Nathan.

David and Nathan are connected in another way. Nathan’s major is secondary education. He hopes to become a middle school teacher all while continuing his Navy Reserve status.

David graduated in 1963 with a major in industrial education. After his release from POW prison, he didn’t go back to teaching. Instead, he stayed in the Navy for many years, reaching the rank of commander.

The strongest connection the two have will be realized on September 14, 2017 when Nathan will receive the largest scholarship to date from the David R. Wheat Higher Education Returns Opportunities Scholarship (H.E.R.O.S.) fund. Nathan was awarded the scholarship for his role as an active duty service member and for his efforts at UMD. Nathan is a hardworking student, and he was Student Association president for two years: 2015–16 and 2016–17.

“I can’t tell you how much it means to me to received this award,” says Nate. “Commander Wheat is a true hero, and my efforts seem so small compared to all he has been through.”

The David R. Wheat H.E.R.O.S. fund was established in 2014 specifically for current students who are military veterans, active duty members, who serve in the National Guard, or, as in Nate’s case, are active in the Reserves.

The selection committee works through a number of qualified students and grants awards based on academic commitment and financial need. The scholarship is open to any UMD student in any subject field who serves in any military branch.

Corbin J. Smyth, UMD Associate Vice Chancellor for Student Life, says Nathan is deserving of the award. "Nathan is someone I consider to be a servant leader — he serves for others, not himself. This was certainly the case the last two years when he led the UMD Student Association, humbly representing his fellow students."

The scholarship was established "to create an awareness and as a reminder of the sacrifices these men and women, and their families, made for safety and freedom that is often taken for granted."