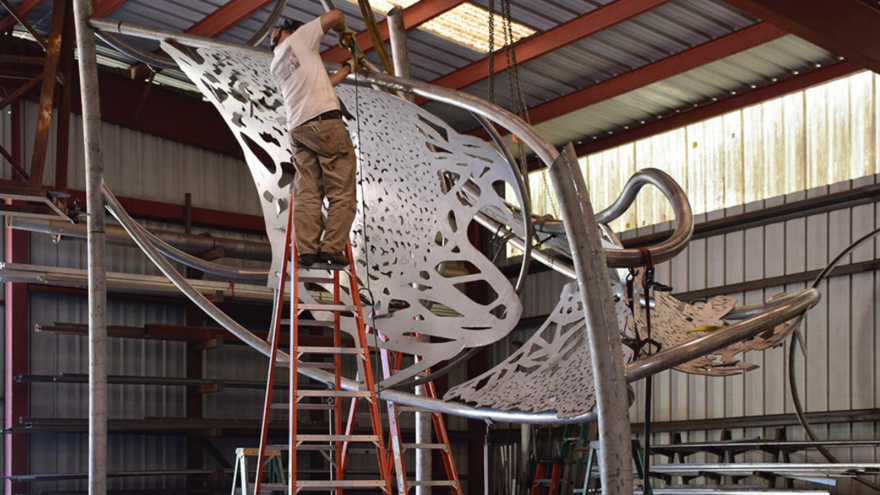 UMD’s Facilities Management crew is installing a nearly 6,000 pound metal sculpture in the plaza outside the new Heikkila Chemistry and Advanced Materials Science (HCAMS) Building, 1038 University Drive, on Monday, June 17, 2019. The crane-operated move of the stainless steel piece entitled Polytropos is scheduled to start at 10 a.m.

Artist Maria Artemis is available for interviews during the installation, along with Art and Design Professor Jim Klueg, who was involved with the art selection process.

Artemis is an award-winning Atlanta, Georgia-based artist. She taught for more than 25 years at the Atlanta College of Art. 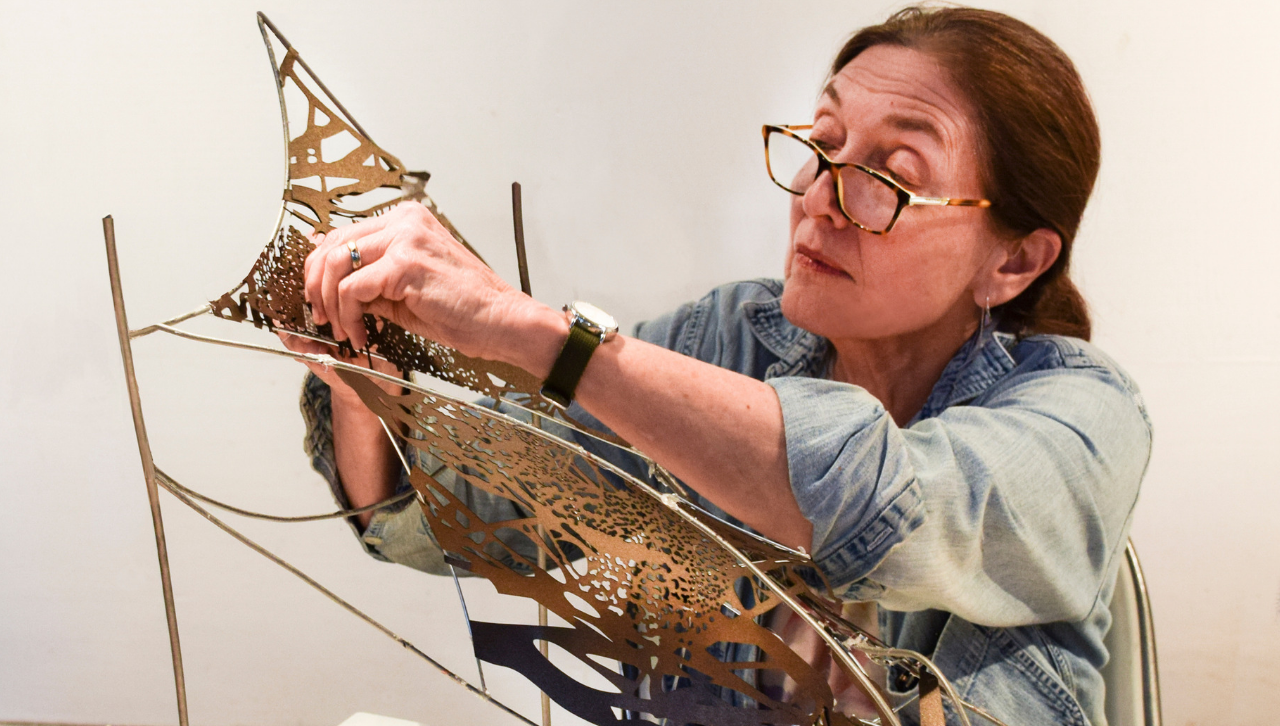 The sculpture is a prominent piece of the landscaping around UMD’s new 56,000-square-foot HCAMS building, which was completed in January 2019.

HCAMS is designed as a science neighborhood– integrating applied research with teaching in its 18 window-filled labs.

This philosophy spills over to the landscape, where large rock benches create a usable space for classes.

Artemis says Polytropos is a response to the discovery dynamism that’s happening in HCAMS. “It seems like a very creative place to work and learn. There are so many different ways to look at the challenges that the scientists are focused on– and one idea sparks another. That’s the way that creativity works.” 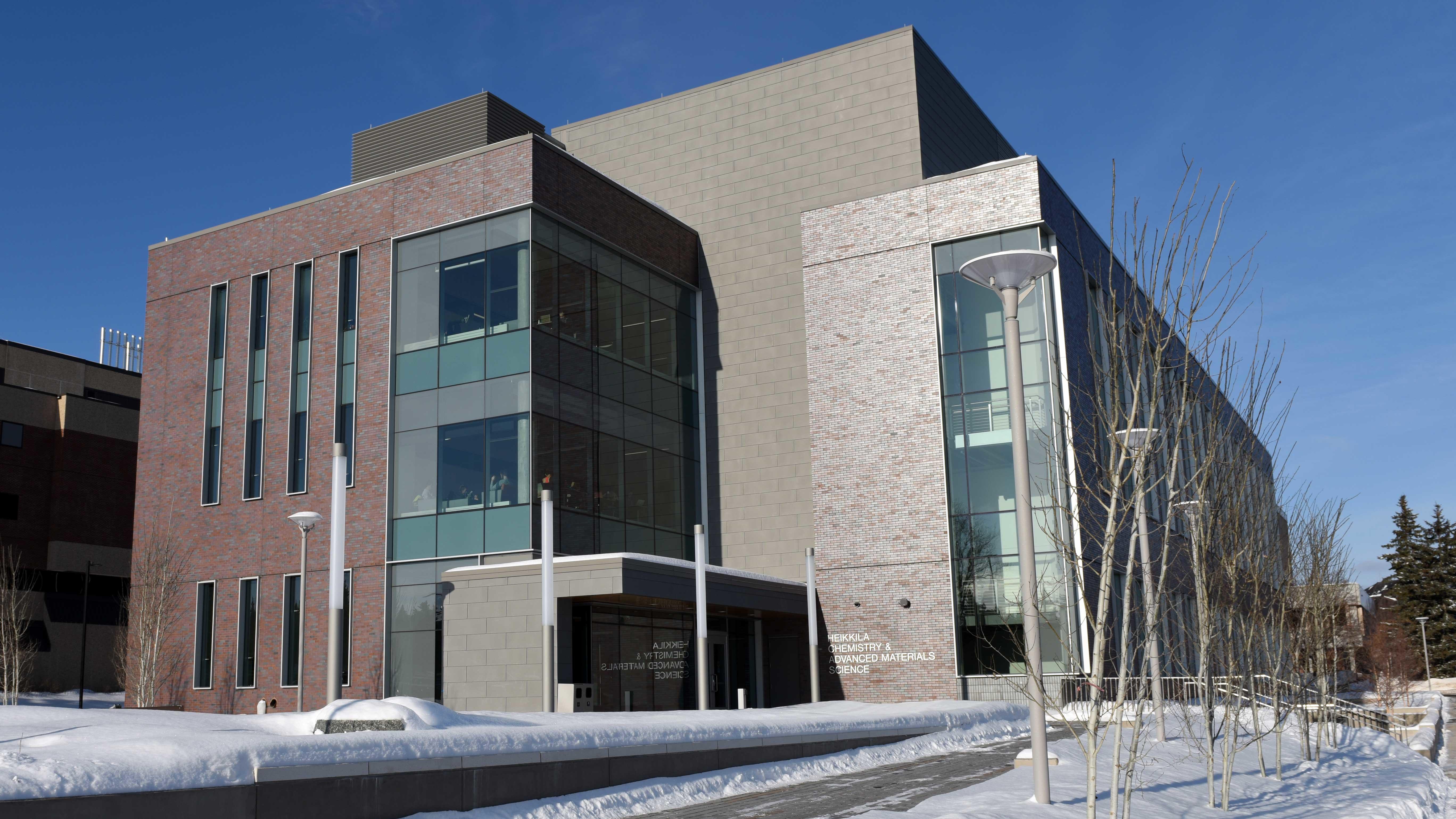 Polytropos is one of two pieces of art that will bookend HCAMS. The other is New York glass artist Paul Housberg’s four large colored glass windows on the Darland side of the building.

Klueg explains that the two works are stylistic opposites of shapes, one organic, one geometric, so they span a range of abstraction approaches.

“The glass are geometric abstract compositions. The color is fused into the large sheets of glass, visually more like a painting than a stained glass look with heavy caming lines,” says Art and Design Professor Jim Klueg. “They will be visible from the road and should be dramatic at night.”

Chancellor Lendley (Lynn) Black formed a committee to advise him on the best art selection for HCAMS. It encompassed diverse disciplines, including the scientists who work in the building, artists, and members of UMD’s Facilities Management team. Craig Amundsen from the Weisman Museum, who has extensive experience facilitating public art projects on the University of Minnesota Twin Cities campus, assisted.

“The process has been consultative,” says Klueg. “Craig Amundsen shared potential artists with us, and we reviewed, discussed, and selected those we felt were the strongest for the specific building and site.”

Klueg says the committee members were not only looking for strong and vibrant art, they also wanted to take into account the scientists’ ideas, as they are the stakeholders who are using the building daily.

The artwork was purchased with funds provided by Minnesota’s percent-for-art. The 1984 legislation encourages state building projects to include up to one percent of the construction budget for artwork.

“The committee was very pleased to be able to commission two artworks from the building’s percent-for-art budget, which will visually activate opposite ends of HCAMS, both sited in very visible parts of campus,” says Klueg.