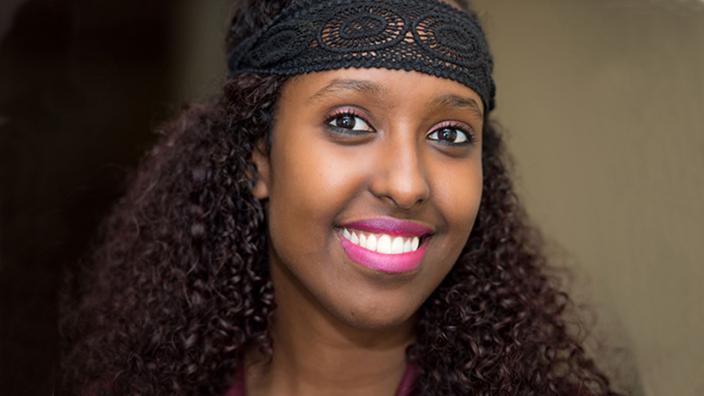 The genesis for Hamdi Barre's leadership was dissatisfaction.

She defied a status quo when she became a Bulldog but, once here, found the scene so stifling she nearly transferred.

Fortunately, that's not her style. Instead of leaving, she dug into UMD and led a much-needed metamorphosis.

Hamdi's post-high school route was ingrained to the point that it almost didn't warrant discussion. She says it's rare for young Somali women to leave home before marriage, so most of her friends enrolled at the University of Minnesota. But Hamdi was ready for something different. As she explains, "You can't be open to others if you don't have a few good friends outside of your same culture." So, nearly sight unseen, she applied to UMD, got accepted, and headed north.

Here, Hamdi's college experience began to wan from expectations. "I was one of the few students on campus who were of color, so right off the bat I almost felt like I didn't belong."

She found camaraderie hard to come by until she met a group on the diversity floor of Ianni Hall. Before long she was spending all her free time in their dorm. "If I hadn't met them, I don't think I'd still be at UMD." Unfortunately, many friends headed home on the weekends. Hamdi wanted to stick around. She was looking for a way to strengthen her connection to campus.

Unfavorable situations cause some to skedaddle. Others find opportunity.

"It's important that our student leaders reflect our student body," says Jeremy Leiferman, the director of Housing & Residence Life. He started at UMD a few years after Hamdi and quickly got to work changing the landscape, shifting the perception of an RA from a rule enforcer to a community builder. That, along with strategic recruiting, led to the more diverse leadership team that's in place today. But it was actually Hamdi who got things headed in the right direction.

Anyone who's met Hamdi would reply, "Of course you are," upon learning that she's a communication major. Her personality leaves no option but absolute rapport.

With this skill set, she created a coalition of change, joining eight friends in a decision to apply to be RAs.

Her motivation was twofold: to give future Bulldogs more diverse RAs and to give her major a "real world" run for its money.

She thought that she could use her communication lessons in her work. After landing the job, she found the opposite– her work amplified her learning. "You're an RA 24/7. You're in class for an hour or two." Hamdi has to be ready to put those people skills to work anytime a resident knocks on her door, a constant opportunity to implement the theory that she's learning in class. "That surprised me. I thought, 'I'm a comm major. I can do this RA thing.' But really it was like, 'I'm an RA. I can do this comm thing."

A mere three years after she started at UMD, Hamdi is preparing for graduation. She's been an RA for more than half her college career. A lot's changed in that time, and it's not happenstance – it's Hamdi. Her deliberate transformation of dissatisfaction into action had far reaching ripples that created a better UMD.