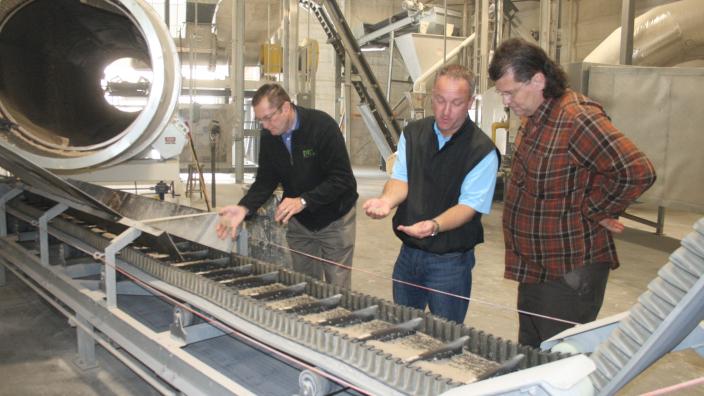 But there’s one highly valuable natural resource that Agronomist Ron Chamberlain says we treat like dirt. Soil. “As a society, we degrade it daily because of some of the centuries-old farming methods we use,” he explained. “We take away the organics and natural biological systems and compact the soil so there’s more runoff and ponding.”

Soil is easy to take for granted. But with just 11 percent of the Earth’s landmass used for crops, and some 7.5 billion people to feed on this planet, we shouldn’t. So when Chamberlain learned that gypsum (yes, the stuff in sheetrock) improves soil health leading to heartier crops, he sought ways to get it to farmers. After launching a company to market gypsum in 2002 and building the Gypsoil brand, he sold the business in 2009 to Beneficial Reuse Management. Today Chamberlain is Gypsoil’s chief agronomist and director of research. Along the way, NRRI’s assistance helped take their business to a new level, launch a new factory and hire 30 employees.

But this is more than an economic development story. It’s a “save the planet” story.

The gypsum they use isn’t a mined and limited resource. It’s a byproduct from coal-based power plants. The limestone used to remove sulfur dioxide in the emissions turns the greenhouse gas into a steady supply of clean, reusable gypsum or calcium sulfate.

Adding the powdery gypsum to croplands showed great results, but the fine material wasn’t easy for farmers to apply. Gypsoil’s owners contacted NRRI Engineer Tim Hagen for a solution that led to an expanded product line in a $5.7 million facility in Winona, Minn. Today they are manufacturing 100 tons of their new product per day with room to grow.

“Applying the powder form with equipment designed for granular products was difficult,” said Steve Musser, director of pelletized products. “And farmers are already making trips over their crops with granular fertilizers. We thought it would be great if they could blend our product with what they have.”

NRRI’s involvement started in the spring of 2013 when a couple of pallets of gypsum arrived at NRRI and Hagen got to work. He looked at production mistakes being made in competitor products, made some comparisons and tried a few new methods. He mixed the damp powder with a binder and used specialized equipment to transform the mixture into tiny beads.

Hagen made about 15 pails of granulized material, which was enough to try in test markets to make sure it met customer expectations and mix specifications. “Once those two things happened, I felt like I put them on the track to get an engineering firm to design a system to commercialize the product,” said Hagen.
Company leadership was impressed by the new process and also thought the product looked great.

“We could not have done this without NRRI. The process is very robust,” said Musser. “The granules are uniform and that’s really important when you’re blending materials so that it spreads uniformly on the field.”

A couple hours west of the Gypsoil plant, farmer Joe Stevermer in Easton, Minn., started using gypsum on his crops as a sulfur source, but he believes the end benefit was also the calcium.

“We’ve had good crops since we started using gypsum, better plant health, better water infiltration” said Stevermer whose neighbor also applied Gypsoil to his crops, but in different amounts on different fields. “And where he used it at a high rate, you could really see the difference. It was amazing.”

Gypsum is water soluble so it moves deep into the subsoil where it benefits the plants most. When more water soaks into the soils it helps with many agricultural problems – less runoff carrying pollutants into water systems, more moisture available for plants during dry spells and less “ponding” on the fields.

The company is continually participating in field trials to show quantifiable evidence of their claims. For example, an Ohio State University study showed that after the first year of application, Gypsoil reduced soluble phosphorous concentrations in drain tile water by 62 percent. As a member of the American Society of Agronomy, Chamberlain also assisted in developing a new conservation practice code “Amending Soil Properties with Gypsum Products” for the U.S. Department of Agriculture.

“The chief challenge has been that nobody knew about gypsum. They just think of wallboard,” said Chamberlain. “The paradigm of agriculture is ‘we’ve always raised crops this way.’ But what we have with gypsum is really a win, win, win, win… for the soil, the plants, the farmer and the environment.”