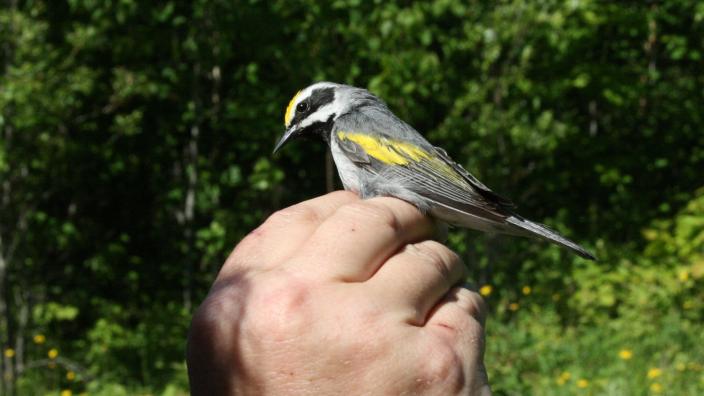 “The Golden-winged Warbler has a few things going against it,” said NRRI researcher, Alexis Grinde.

She has been studying this yellow-capped, bandit-masked, teeny-tiny gray bird for four years. Because of a sharp population drop, the bird is being considered for the Endangered Species list. But it has one thing going in its favor: Northern Minnesota’s working forests.

Yes, its population is declining faster than any other North American songbird, especially in the Eastern Great Lakes regions of the U.S. where the Golden-winged has been losing habitat. And for a long time, researchers have noted their hybridization with the Blue-winged Warbler, further compromising both species.

But here in northern Minnesota, the species is surprisingly robust, although researchers aren’t exactly sure why.

Their historical distribution reaches into New York to the east and west into Ontario, but today over 50 percent of this species population nests in this state. Why here? Why now? NRRI ornithologist, Jerry Niemi, thinks it may be a combination of the region’s natural features and smart logging practices.

“We’ve been gathering data on the Golden-winged warbler for the past 20 years as part of the National Forest Bird Monitoring project and the Breeding Bird Atlas project,” said Niemi. “And the highlight is 660 acres of forest on Blandin Paper Company property where we had been gathering bird data in the 1990s.”

Back then, Blandin wanted to harvest the large site and asked Niemi what he thought about it. He responded that it would make an interesting experiment because, at that time, logging tended to be done in small plots – 20 to 30 acres – to be more aesthetically pleasing to the public. But research was showing that large areas cleared by forest fires could have a beneficial effect on wild life as the forest grows back.

“We thought maybe we could try harvesting to emulate a fire disturbance, leaving the wetlands intact, patches of mature trees and woody debris… we varied the logging over the landscape,” said Cheryl Adams, Blandin Forest Ecologist. “And then we kind of forgot about it until 2013.”

That’s when Adams asked Niemi if he’d like to go back and do bird counts in the large plot of now young trees, about 11 to 15 years old. He readily accepted because it’s rare in ornithological research to be collecting data from such a large landscape. NRRI scientists started collecting bird data in the area and are continuing the research this summer.

“We were thrilled and amazed to find a thriving population of Golden-winged Warblers at the site,” said Niemi. “The size and age of trees should have been too old for that species.”

But Grinde and Niemi believe the habitat mosaic left by the logging effort happens to be ideal for this species – a combination of shrubby wetlands, young trees and some older trees. Future research will compare the populations in this plot with other similarly harvested aspen forests to find out if this is an anomaly or a new best practice model.

“There’s so much research being done by others throughout their range,” said Grinde. “It’s really exciting because in Minnesota there are a lot of researchers working together to create habitat that will help conserve the species. That’s what motivates me.”