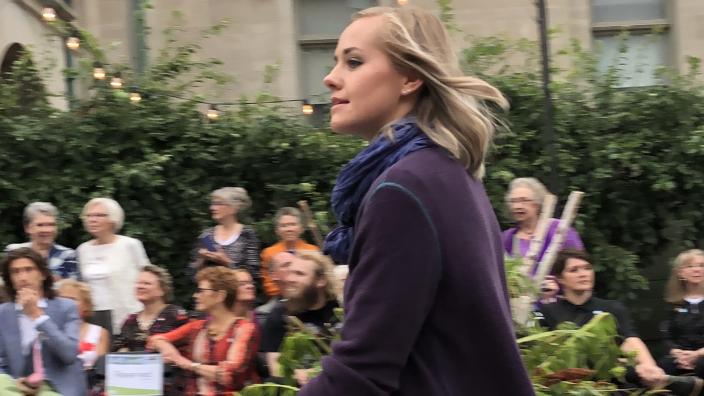 "It was nerve-wracking at first," Gianna Jubie says. "A lot of thoughts were going through my head, like I should have never said yes to this." Gianna waited with the other models off-stage and listened to an introduction to Gudrun Sjödén, the 77-year old Swedish fashion designer.

"We heard that you can never be depressed in a Gudrun Sjödén store, and I realized it was true. The colors are so happy." And then, suddenly, Gianna was walking through the crowd. "My nerves disappeared. Almost everyone was wearing Gudrun Sjödén clothes, and they were all smiling and cheering. I felt like a celebrity."

Gianna's journey to a fashion show at the American Swedish Institute in Minneapolis began in Stockholm two months earlier during a UMD Nordic Art and Design Study Abroad Program.

Alison Aune, the art department professor who led the trip, received an invitation from Gudrun to bring the UMD students to her corporate headquarters and store in Stockholm.

"The tour of the facility was incredible," Gianna says. "We saw the whole production from textile art, to fabric samples, to the prototype clothing. The designers were working on catalogues and promotions for the following year's line." She saw "look books" that gave an overall feel to the collection and the catalogue cover during it's creation.

"I was amazed to see the same computer programs we used at UMD. The designers were using the same versions of InDesign and Illustrator that I use."  After the tour, the group met Gudrun in person. "She was so gracious. She talked about the launch of her fall line in Minneapolis and invited us all to contact her staff about helping out with the show."

The fashion show in Minneapolis is just one more positive experience Gianna has had at UMD. "My older sister went to UMD, and she brought me to campus to see a play in the Marshall Performing Arts Center. I was hooked!"

When she attended Esko High School, Gianna was always "artsy and doodlely." With lots of college credits from the College in the Schools program, she dove right into UMD's art and design classes. "My teachers, Betsy Hunt, Vicky Lehman, Jennifer Gordon, and others, made design interesting and meaningful. To me, art is relaxing, it's not work."

Gianna is thankful for all the support she has received both from teachers and from scholarships. She is a recipient of the Iron Range Merit Scholarship, the U Promise Scholarship and the Herbert Sorenson Family Scholarship.

What's next? "I can't thank Alison enough for introducing us to so many designers in all the cities we visited. Now, I want to intern in an ad agency in Stockholm," Gianna says. "Then I want to move there!"

About the Department of Art and Design

About the Study Abroad Program