Getting Paid for Passion 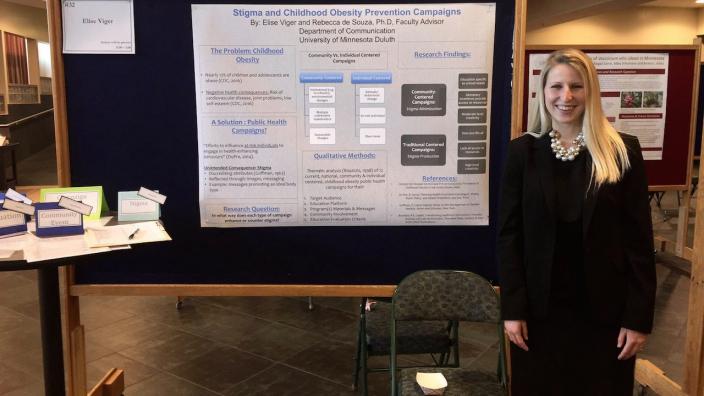 Elise Viger has graduated from UMD but she hasn’t left her UMD research behind. 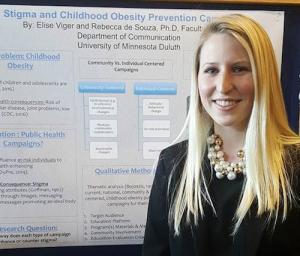 Elise found that when community centers encouraged physical activity, helped people garden together, and called for fruits and vegetables to be available in neighborhoods, there was very little stigma associated with being part of the campaign.

How UMD's UROP program sets students up for success

After graduating from UMD, Elise Viger started a job as an executive team lead for Target in one of their stores. She hasn’t left her UMD research behind, though. Collaborating with her professor, she plans to submit a paper she wrote about health campaigns to prestigious academic journals.

Elise, a communication major, wanted to find out what public health programs in the U.S. were successful at helping young children eat healthy and maintain a healthy weight. UMD’s Undergraduate Research Opportunities Program (UROP) supported Elise’s passion to analyze childhood obesity health campaigns; and she was paid for it too.

It turns out that images of a thin children eating fruits and vegetables aren’t the answer. Working with her professor, Dr. Rebecca de Souza, Elise analyzed the campaigns by looking at everything from the goals of the campaign to imagery and branding. Most of all, she wanted to find campaigns that didn't stigmatize people and didn't make them feel negative about themselves.

Marketing campaigns targeting individuals and focused on body shape and size had negative effects. “Those people may feel bad for their illness and feel [blamed as if] they’re the problem,” Elise said.

She found community-centered campaigns were the most successful. When community centers encouraged physical activity, helped people garden together, and called for fruits and vegetables to be available in neighborhoods, there was very little stigma associated with being part of the campaign. “Why not change the surroundings and get people to work as a group towards something better?”

“I always knew I loved research,” Elise said. “I enjoyed reading and uncovering answers to the questions I had.”

Elise is grateful for the opportunities it created. During presentations she was able to talk with other professors and administrators about her research. “It lead me to more ideas for the future.” Elise now plans to move forward with her research. “Mine is one of the few projects I’ve looked at with real life comparisons and contrasts,” Elise said. “We want to submit it for publishing.”

About the Communication Major