Diversity and Fashion Take the Stage 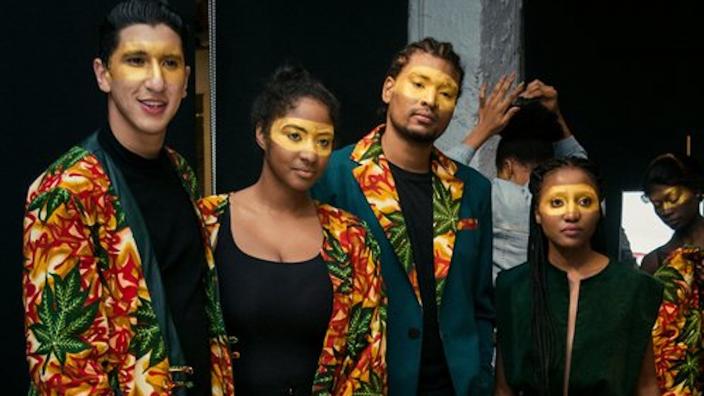 Backstage, a makeup artist adds lipstick as a finishing touch on a model while upbeat music plays in the background in Shanghai, China.

Vibrant, colorful clothes worn by a diverse group of models of all ages take the focus on the runway. The crowded room cheers for the designers’ styles as a feeling of togetherness and empowerment envelops the scene. 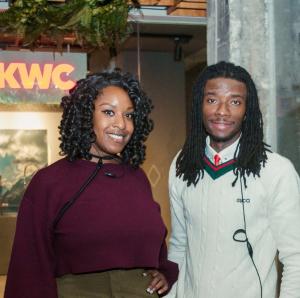 TaVanni Singleton '08 with her friend and stylist Benjamin Kontoh at Shanghai Black Fashion Week. TaVanni says,"It’s like a lion. Africans connect with it because of its strength and its courage.

“It’s fun,” TaVanni Singleton, communications director for the event, says. “It’s alive. It’s exciting. It’s an event like no other.”

TaVanni, a 2009 UMD graduate with a degree in health education, has certainly come a long way since growing up in St. Paul, Minnesota. She now helps plan one of the only fashion weeks dedicated to diversity in the world, Shanghai Black Fashion Week (SBFW), and is part of the core group who started it. The biannual show runs for three days with about three fashion designers per night from all over the world showcasing their designs.

TaVanni was part of many projects during her time at UMD. And, although her major was health education and not event planning, she gained a lot of experience with the latter. She was president of the Black Student Association where she planned events that included Soul Food Dinner and a Halloween movie day.

“I learned a lot about doing events through Black Student Association,” TaVanni says. “After I left, people were still talking about me, which was interesting.” Chris Davila, now director of the Office of Diversity and Inclusion at the College of St. Scholastica agrees, “TaVanni was a force at UMD. She was a great organizer, and we all knew she would go far.”

While attending UMD, TaVanni was really close to Susana Pelayo-Woodward, director for the Office of Cultural Diversity.

“Susana was like a mother to us all,” TaVanni says.

Before making the move to Shanghai about two and a half years ago, TaVanni lived in Thailand. However, instability in the country made it hard for her to find a job. She looked for jobs in other countries, because, as she says, “I’m flexible, and I go with the flow.”

Things took a turn for the better when her friend, Benjamin Kontoh, a stylist, became “very interested in creating an event that was very diverse.” With Benjamin’s background in fashion and TaVanni’s experience in event planning, they decided to create a unique fashion show. Inspiration for SBFW struck, and TaVanni made the trek to Shanghai.

“Our culture influences our fashion so much,” TaVanni says. Now, she teaches at an international high school and acts as communications director for SBFW in her spare time.

The show focuses on showcasing diverse, underground fashion talents worldwide. All the designers are undiscovered and from different countries.

“It’s like a catalyst for these designers,” TaVanni says. “As soon as they became part of the show, they had orders coming in fast.”

Along with helping people kick-start their passions, the show also provides a fun and entertaining time.

“The energy of the show is really welcoming,” TaVanni says. “It’s like a lion. Africans really connect with it, because of its strength and its courage. The mane is bigger, larger than life, and it’s special.”

Photo Above: Models get ready for the runway at the fall 2017 Shanghai Black Fashion Week.

About the Office of Diversity and Inclusion

About the Department Public Health Education and Promotion