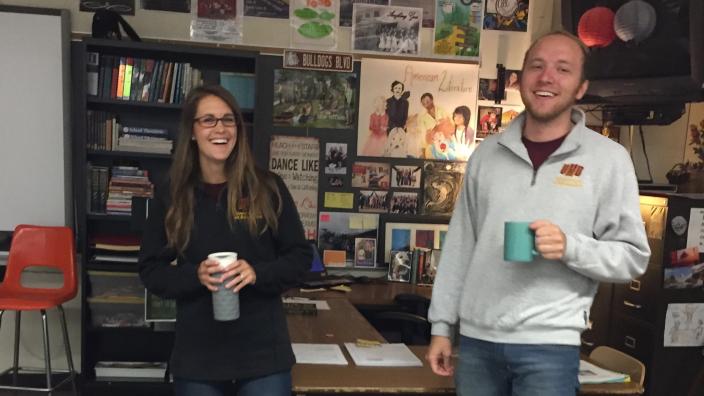 They arrive at school and laugh. They are wearing the same clothes: khaki slacks and shirts in the exact same shade of blue. They get into position, their backs to the concrete wall. There’s just enough space for the two teachers to stand shoulder to shoulder, greeting their students as they enter the classrooms. They chat as the students file into the two classrooms doors just a few feet apart.

These two English teachers, Craig Zimanske ’12 and Kelsey Shimshock ’12, have a long history. It goes back to their years as undergrads at UMD. They shared notes and laughed in nearly every education class they had together at UMD.

Four years later, they were in for a shock. They met again when both landed at Forest Lake Senior High School, both teaching English. To make matters even better, they were assigned classrooms right next to each other.

Craig teaches language arts and theater and has lots of fun directing musicals and plays. He’s directed classics like The Crucible and recent favorites such as the Addams Family. His love of American literature permeates his classroom and feeds his enthusiasm for exploration. Enthusiasm abounds when it comes to his educational trips. Nearly every year, he tours Greece and Italy alongside 50 or more students and 10 teachers on each trip.

Kelsey spent years in Honolulu, Hawaii, teaching in three different situations including a high school. “It deepened my understanding of world cultures,” Kelsey said. It gave her some guidelines. “I try to look at every person as an individual. Even when we look at characters in books, I help students look behind the facade to what other people don’t see.”

Her years in Hawaii made her question some Midwestern judgements. “Hawaiian luau dances are breathtaking, and we teach them in class,” she said. “The island had certain ways of doing things that were beautiful.” She says it’s important to preserve a culture even when it goes against modern society. “Hawaiians have different values, like Island Time, which can mean being late or early,” she says. As a result of her years living with a different viewpoint, Kelsey tries to make her classroom more tolerant.

Both Craig and Kelsey say they are still influenced today by one class at UMD. Education Professor Helen Mongan-Rallis led the class in a Privilege Walk. Her education undergrads stood against the wall and Helen called out instructions. “Take one step forward if you’ve never gone to bed hungry,” Helen said. “Take one step forward if both of your parents attended college.” The activity demonstrates how social identifiers that are out of participants' control have affected their privilege.

“It was the first time I could feel how tangible it was that students with privilege have so many more advantages,” Craig says. “The exercise showed how privilege doesn’t have anything to do with what a person does.”

Kelsey and Craig hope to get assigned in neighboring classrooms next year too. They’ve got a good thing going, mixing challenging topics and fun, and it seems to delight their students.

Above Kelsey Shimshock and Craig Zimenske

About UMD Secondary and K-12 Education