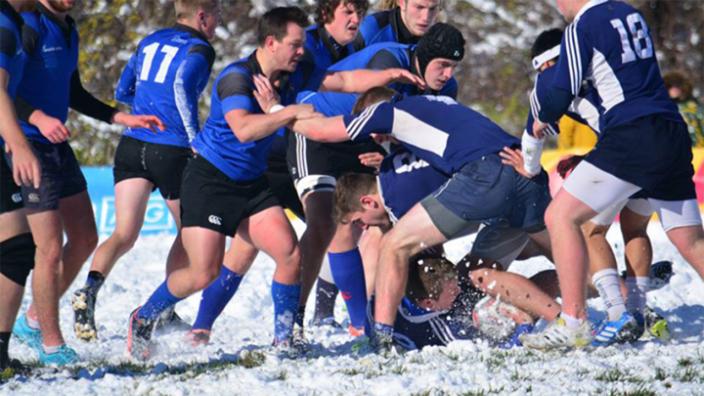 The Fighting Penguins take off for their third-straight National Championship

Sprint workouts on the track, running the hills of Chester Bowl, and 5k's have led the UMD Rugby Fighting Penguins to their fourth Final Four visit, and possibly their third consecutive national championship.

Junior Trace Bolstad, a captain of the Fighting Penguins, readies for the 3 p.m. departure to South Carolina and 21 hours on a bus. "I just want to get the bus ride over with," Bolstad said. For him, the adrenaline kicked in yesterday after a nap. He woke up with the jitters and is ready to go.

The Penguins came into this season two All-American's short, but that didn't phase them. They knew they had to come together and win games as a team. "We rely on each other a lot," Bolstad said.

Friday, the team will have a training session to maintain their perfect conditioning that Coach Jeramy Katchuba made them work so hard for. Next, will be a team dinner at an Italian restaurant in South Carolina, which is now part of their pre-game team ritual after four years of finals. Bolstad says half the team knows what to expect, what is going to happen, the feelings that will take over, and even the emotions that will play with them. For the other half of the team, it will be a new experience. Something that Bolstad says will be fun to watch.

"I don't know how to describe it; it's the butterfly's you always hear about, your whole head is just racing about everything you can do to better your teammates," Bolstad said. "It's an incredible feeling."

The team won the national title for 15-man rugby in 2013 and 2014. If they win this year, completing a three-peat venture, it will be the most special award the team has received yet. Katchuba won coach of the year last year, and this achievement would get him the recognition he deserves according to Bolstad.

After this season, there will be a three-month break before they do it all over again for the 7-man season.

Wish them luck and receive live game footage on their Facebook page and the Fighting Penguins website.