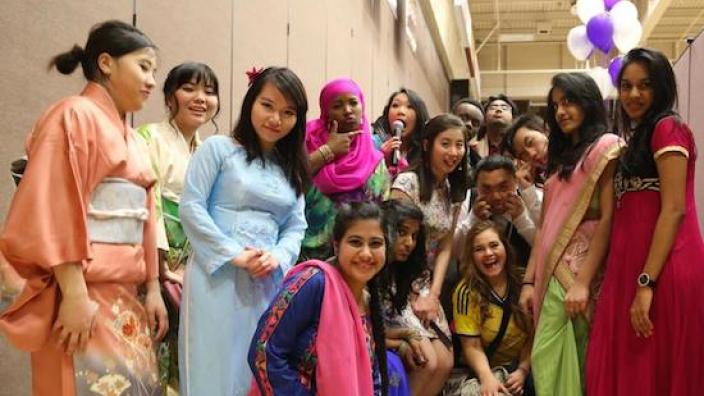 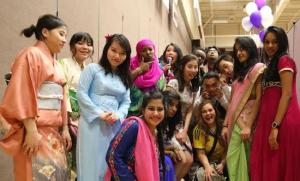 Behind the scenes at the 2015 Feast of Nations Fashion Show. All photos on this page are from the 2015 event. 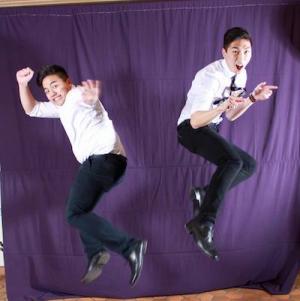 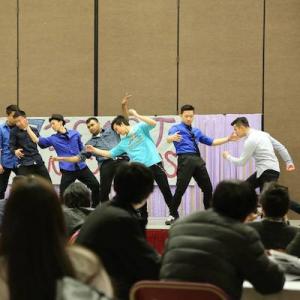 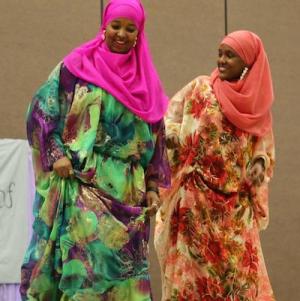 The 48th Feast of Nations

Mai Che Lee and Thomas Thao are excited about this year’s UMD Feast of Nations. Mai Che, who is the International Club president, and Thomas, who is the public relations officer, are working hard to put on the event on Saturday, February 20, 2016. The evening starts with a dinner in the UMD Ballroom at 5:30 pm and moves to the Marshall Performing Arts Center at 7:30 pm.

“The Feast of Nations is the most meaningful event for the International Club,” said Mai Che.  During the evening, various cultural shows are performed by UMD students from all over the world. “When I first saw the international students and our domestic students get on stage, I never expected them to be so cool!” said Thomas.

“Embracing the World as One” is the 2016 Feast of Nations theme. Thomas thinks it is a fitting motto because “Embracing the world as one” is also the purpose of the international club. This year red and silver are the chosen colors to present a unified look for the evening.

During the dinner, participants will be able to taste different kinds of foods from the Middle East, South America, Europe, China, and other countries.

International Club was formed in the early 1950s; it’s one of the earliest student clubs at UMD. The club welcomes UMD students as well as community members, high school students, and students from other colleges. Every year the club provides various events to attract members and offers the opportunity to interact with diverse students.

This year the club has already hosted several events, such as paintball, Taste of UMD, pumpkin carving, skiing, etc.

Thomas: Bringing Cultures Together
Thomas, a junior, is studying engineering and international studies.

He is really interested in learning more about his heritage.  As a member of the Hmong community, he is curious about learning more about his own background. His parents told him the family history can be traced back to China where they were first banished. The family tried to settle in Laos, but instead landed in Thailand. Because they helped America with the Vietnam war, they were banished again. Finally, 40 years ago, the U.S. offered the family a chance to move to America. Thomas is the first generation of his family to be born in the U.S.

Because of his unique background, he was fascinated about more cultures. When he graduated from St. Paul Central High School and came to UMD with his sister, he could not believe that he could join a club that celebrated so many cultures.

Since joining the club, Thomas has become more open-minded. His idea is to balance American culture with his own. “I will keep parts of my traditional culture such as religion, but I will also teach my future kids to learn some American ideas, such as treating women as equal as men.” Thomas said.

“In the international club, we make new friends from diverse cultural backgrounds. It is a great chance to educate myself to be more open.” Thomas said.

Mai Che: Taking the Lead
Mai Che, the president of the international club, is a junior student focusing on chemistry and Chinese studies. Mai Che, like Thomas, came to UMD from St. Paul Central High School.

She is an out-going person who loves to make friends with international students and minorities at UMD. She started going to events hosted by the international club when she was a sophomore. After a year, she decided to devote herself into the group by running for the leader position to show her ideas and abilities.

During group meetings, she improved her communication skills and learned the importance of working as a team. In her group, all executive-boards are equal and work together to arrange every event.

Mai Che is in charge of the fashion show this year.  “I feel stressed out,” she said. “But I’m doing my best to make the event a success.