A Catalyst for Change

Emily Larson talks about one evening when she felt a flash of understanding. After dinner, she sat at her kitchen table studying. Her husband, Doug Zaun, and her oldest son, Gabe, were in another room. Next to her sat Eli, her son, writing out letters of the alphabet. “You know how kids are,” she says. “Eli was intent on his letters; he was so serious.”

She flipped a page of her UMD social work text and stopped. “I realized that what I was doing was for him. I was teaching him that education is serious and important, and that he could be whoever he wanted to be.”  She looked at the book’s cover and that brought another thought. “I wanted to make a difference.” 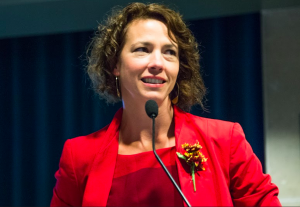 In fall 2017, Emily was awarded the College of Education and Human Service Professions (CEHSP) Distinguished Alumni Award for the difference she has made in Duluth and for “bringing distinction to herself and the university through her contributions to society.”

Her accomplishments indicate how deserving she is of the award. She was making a difference long before she arrived at UMD. After she received her social work undergrad degree from the College of St. Scholastica, she worked for CHUM, a charity assisting homeless people. After receiving her Master of Social Work degree from UMD, she went on to serve on the Duluth City Council and assisted a long list of non-profit organizations. In January of 2016, she was sworn in as mayor of Duluth.

“UMD faculty supported me all along,” she says. “I learned so much from Kathy Heltzer, Anne Tellett, and Denny Falk.”

Emily says her social work background helps her work as mayor. “It seems like an odd combination,” she says. “But it’s the perfect training ground.”

She compares a family in crisis with political issues. “You have the same steps,” she says. “You have to understand the issue, identify the challenges, and plan for success. It doesn’t always work, so you have to revisit the situation along the way.” She lists Duluth issues. “Safe neighborhoods, economic development, infrastructure repair, and energy independence… All the players may not be on board but you have to move forward.”

There are social work traits that Emily relies on, “I try to be a good listener, to listen way more than I speak.” That leads to good relationships.

“There are times I have to sit with discomfort,” she says. She credits the UMD social work program for teaching her that skill. “It's powerful, because it creates a space for other voices.”

And to Emily, the other voices are key to her ability to make a difference.

About the UMD Department of Social Work