Fame at the Finish Line 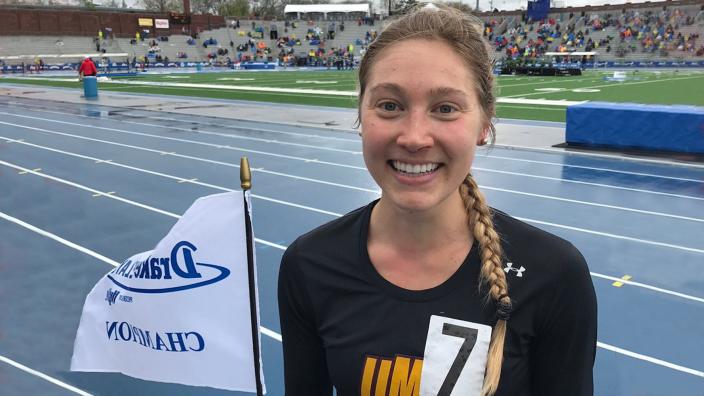 When Emi Trost kicked up dust as she ran down the gravel road of her small town farm home, she had no clue about the whirlwind of a college career that was ahead for her.

Emi grew up near Cannon Falls, Minn. on a family farm. “If my dad forgot a tool, he’d send me up to the house to get it and I’d come running to him all the way to the back pasture,” she says. 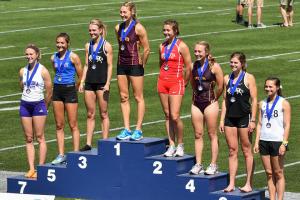 She was home educated up until college. The physical education program Emi’s mother set up for Emi and her three younger brothers consisted of a race down their gravel road and back. That was the start of Emi’s training program.

When Emi reached eighth grade, she joined the Cannon Falls High School cross-country team and competed for their track team all throughout high school.

“I was so scared,” says Emi. “On my first day of cross country practice I didn’t know anybody, and I didn’t know what it was all about.” Emi was surprised how well she could compete with the rest of the team.  She was a natural. “I really discovered my true talent.”

Growing up, Emi always had a connection with the city of Duluth. Her family took short vacations to the city, and UMD is her father’s alma mater. The best part was UMD offered the major she wanted, exercise science.

“I grew up very familiar with the Bulldogs,” says Emi.

Duluth gave Emi the perfect balance of an outdoorsy town with a homey feel, making it a perfect fit.

On the track field, she fell in love with the drive and the work ethic that the team possessed. “I came to practice with a purpose every day,” says Emi.

With the talent Emi possesses, a lot of people were surprised she didn’t choose to attend a Division I school, but she defends her decision. “There are many talented athletes across all divisions.” she says. She wanted to be an athlete and still have a life outside of sports. “In Division II, you still get to be a student and you can still be a person.” Emi plans to graduate in spring 2018.

Through her years with UMD’s track and cross country teams, Emi gained a lot of recognition and set multiple school records in the 800m and 1500m races. She also won the Div. II national championship for the 1500m race in Florida in May 2017.

Success is sometimes hard for Emi to handle. “My goal is to be accepting, gracious, and as humble as I can be,” she says. “At the same time, I don’t want to degrade myself because I do have potential.” Learning how to handle the success takes balance. “I try to accept the accolades and be really thankful for them. I’m excited for the next challenge.”

“I haven’t always loved every part of it; running definitely has its ups and downs.” she says. “I learned that the fun parts wouldn’t be possible without the grueling workouts and the hard races.”