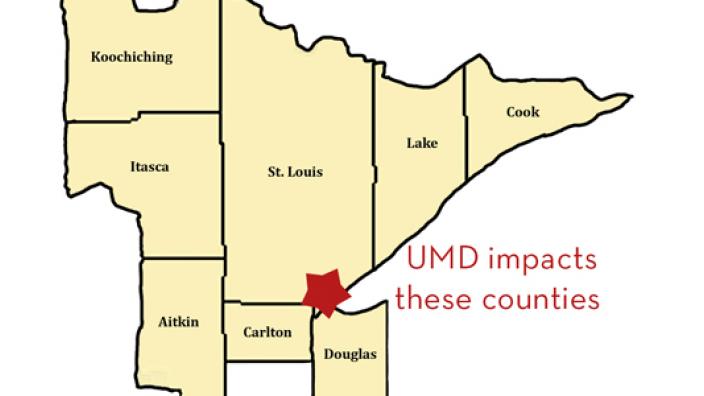 Here's how the numbers add up: UMD budgeted $248 million in operational expenses in 2014, which included $137 million in compensation and benefits for nearly 2,000 employees. UMD also spent $13 million on construction projects.

"These are the direct expenses that UMD has, but when you look at how they ripple through the local economy, it actually multiplies to create more jobs and more spending in the region," explains Monica Haynes, director of the BBER. Examples of this dispersion include things like additional labor and inter-industry spending.

Student and visitor spending provides a significant contribution to the local economy, as well. The BBER's report found that UMD students spent an estimated $69 million and their visitors spent an additional $7 million in 2014. Combined, this spending produced nearly 700 jobs and increased output for the region by just over $77 million.

In total, the impact of all UMD expenditures and those related to its students and their friends and families is estimated to have supported 4,100 jobs with a total effect on regional output of more than $521 million.

The last time a comprehensive study was done was 2010. Comparing the two studies shows that UMD's regional output today is 5.7% greater than it was five years ago.

"The Economic Impact of the University of Minnesota Duluth on Minnesota's Arrowhead Region and Douglas County, WI." focused on 2014 and the report was completed in July.

The study area included the seven counties of the Arrowhead region (Aitkin, Carlton, Cook, Koochiching, Lake, Itasca, and St. Louis) and Douglas County. The impacts of student and visitor spending were based on information collected from a study by Wilder Research for the Minnesota State Colleges and Universities system in 2006.