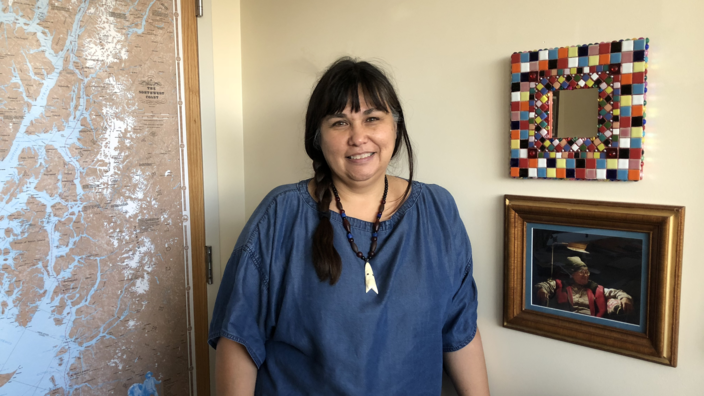 Artwork, books, and photographs grace Dr. Mary Owen's office. A huge map of the islands and coastal lands of southern Alaska hangs on the door. The map is of Southeast Alaska, the land of the Tlingit, Haida, and Tsimshian, the place where her mother and father still live. 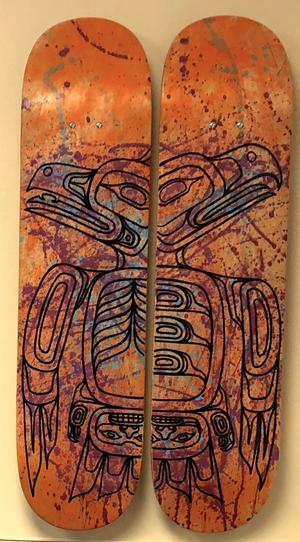 In the office of Dr. Mary Owen, the image of Tlingit eagles are carved on two wooden snowboards.

Owen stands near a photograph and points out the faces of the first year medical school students. It's the newest group of Native Medical students to join the hundreds of past American Indian and Alaskan Natives in the University of Minnesota Medical School, Duluth campus.

She was once among them. She doesn't brag, but it is clear from her voice that she is pleased to be back in Duluth, working with the medical school that is second in the nation for successfully graduating Native American medical doctors.

Dr. Owen is the director at the Center of American Indian and Minority Health (CAIMH) at the University of Minnesota Medical School, Duluth campus. A deadline looms; she is writing a proposal for funds to support even more students, from grade school to medical school, to pursue careers in the health field, yet she makes time to talk about the importance of her work.

She is an assistant professor, she administers several programs that support American Indian students, and she also works as a physician for the Leech Lake Band of Ojibwe.

The path to Duluth and CAIMH began in Anchorage. After college, when she was working with the Alaska Alliance for the Mentally Ill and the Alaska Psychiatric Institute while receiving health care at the Alaska Native Medical Center. “There were no Native people who were taking care of patients. There were no Native doctors and very few Native nurses,” Owen says. “Native people were answering phones and mopping floors, which were very important jobs, but they weren't making the decisions." She set a course for herself.

"I needed to go to medical school,” and she had a final goal, "to get back home and work for my tribe.” She completed her undergraduate prerequisites for medical school at the University of Oregon and began to look at medical schools around the country. An interview in 1995 with CAIMH's then director Dr. Gerald Hill was all she needed to pack her bags.

"Dr. Hill knew so much about what I was going through," she says. "He had seen it in so many other students. And on top of that, he was so smart. As he talked, he could weave in and out of how the program worked, what was happening inside of our communities, and making a commitment to Native communities."

After medical school In Duluth and Minneapolis, and then a residency at North Memorial in Minneapolis, she returned to Juneau in 2003 as a family physician at the Southeast Alaska Regional Health Consortium.

“The pinnacle of my success was becoming a doctor, that was everything to me." she says. She spent over a decade in practice. But the call to come back to Duluth and CAIMH was strong. "The U.S. graduates about 40 Native physicians out of 20,000 total participants each year,” Mary says. At CAIMH, she has become part of that important work.

There a part of Owens work than reaches a larger population. She teaches an American Indian Health seminar that has gained attention because she has opened it to all students. She addresses health disparities, the gap between the haves and the have nots in health care. "It isn't just the Native communities," she says. "Outside of our community, the same immense health disparities affect many groups. The health seminar covers the ways we can make change."

Owen credits her parents for giving her a strong drive to make change. She isn't technically a first generation college student, because her mother has an associate degree in nursing. But, as she grew up, contacts with college educated friends and relatives were few. Her mother has always been a member of the Alaska Native Sisterhood, a civil rights organization that represent the needs and rights of Alaska Natives and also has a long history of involvement in Alaska Native Tribal government.

"My dad had left high school at age 14, and went back to get his GED after I went to college. That was pretty cool,” Owen says. “Despite having no education at all, he was truly a big community advocate.” Owen's father often "marched down to city hall and demanded rights for underrepresented people." For instance, for two years he single handedly lobbied in the City of Juneau to build an outdoor covered play area for kids in the poorest area of town.

Fighting for justice was ingrained in Owen from her earliest days. Right now that drive is centered in two areas, "The medical school is looking for students who are committed to better health access and community advocacy," she says. "I'm finding students that are committed to helping Native people."

“I love it because I get to help get Native students into medicine," she says. "They're often the first generation in their families to go college." For Owen, it is a great reward to see the students go to work with American Indian and Alaska Native populations, in any capacity.

“I always tell students, you can be a neurosurgeon or a mentor, as long as you give back to the community,” Owen says. “But you have to give back. That should be required of all medical students.”

About the University of Minnesota Medical School Duluth campus