A Legacy of Care, Support, and Inspiration 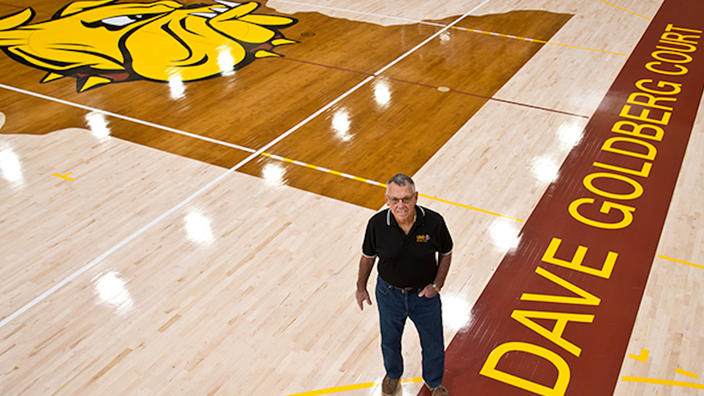 In November 2018, UMD offered Dave Goldberg a special tribute for years of dedication to UMD Bulldog Athletics. Dave is the first UMD graduate to be presented with a University of Minnesota Alumni Service Award. 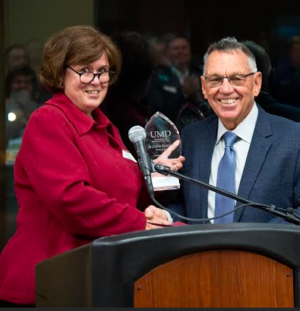 From the moment he left his Iron River, Wisconsin, home to come to UMD, through his long career in the business world, Dave has kept the welfare of UMD students and programs in his thoughts and actions.

Rich Steffen tells it this way. Dave Goldberg walked through the room greeting basketball players. It was 1990 and a Hoop Club event at Skyline Lanes was lively with conversation. Rich, a freshman on the team, remembers meeting Dave. “He shook hands with me and sat down. He asked me about the team and how I was doing. He wanted to know my major, and how I liked my classes so far.” That is Dave’s style. “He’s easy going, casual,” Rich says. “He made me feel comfortable.” That meant a lot to a player far from home.

As the years went on, Dave offered Rich a summer job and the two got to know each other. “It wasn’t that I was special, that’s just the way Dave is. He cares about all of us.”

That sentiment was echoed at the November ceremony by dozens of people: players, families, coaches, and fans. Dave cared.

Dave has been an enthusiastic booster. The Hoop Club folded into the new booster group, the Bulldog Club, and Dave stay involved. He and his wife, Lisa Goldberg, have made an indelible mark on UMD. Over time, their support of Bulldog Athletics has grown even stronger.

Over the last 25 years, the Goldbergs have initiated multiple scholarship endowments directed to UMD men’s and women’s basketball, endowed scholarship support for all of the UMD NCAA Division II programs with the Goldberg Family Scholarships and the Goldberg Championship Scholarship Challenge, and gifted substantially to the Romano Gymnasium Renovation Project.

Just recently the competitive playing surface in Romano Gymnasium was dedicated by UMD to honor Dave. It is now called the “Dave Goldberg Court.”

Dave has sought to improve lives through his generous support of the Miller Dwan Foundation, Salvation Army, and Shriners Speech and Learning Clinic. He created the Dave Goldberg Center at the Boys & Girls Club of the Northland, supports literacy programs along the South Shore of Wisconsin, and funded the Iron River Community Center and Library.

The depths of Dave's support extend to this day. He is a fixture in the stands cheering on the UMD men's and women's basketball, football, volleyball, softball, as well as men's and women's hockey teams. If he is nearby, think in the same state, he often drops in to watch a game.

Josh Berlo, director of intercollegiate athletics at UMD, tells it this way. “Dave is the consummate Bulldog in all facets. He is personally invested in area youth, our students, and UMD's future. Our institution and community are enhanced by having Dave Goldberg as a part of the team.”

Rich tells about one night just a few years ago that gives some insight into Dave’s drive. Rich stayed with American Family Insurance after he graduated from UMD and has now worked his way up to the position as president of American Family’s Life Co. Rich and Dave stayed friends.

They were on a fishing trip and after spending all day on the water, they chopped wood back at camp. After they built a campfire, Dave says, “I’m going to take two.” Rich asked for an explanation because most people say “take five.”

“That’s how Dave got ahead,” Rich says. “He has an work ethic that gives him an advantage. He puts in the time and works so hard, he outworks the competition.”

The room was filled with well-wishers the evening Dave received the Alumni Service Award. All agreed, Dave puts in the time to care, support, and inspire. Through his drive, he has made UMD a stronger university.