A Curiosity for Chemistry 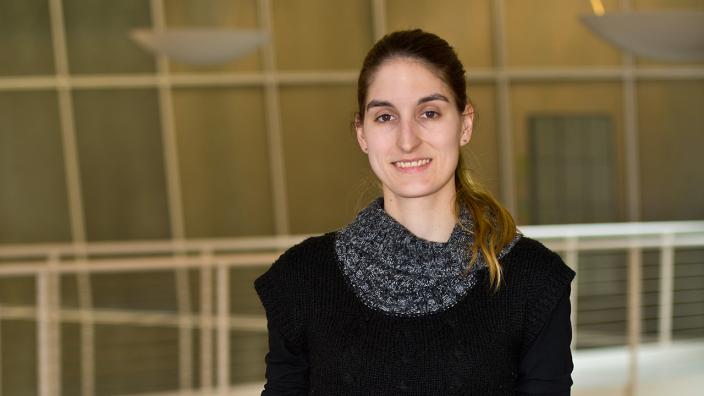 This was no ordinary college admissions tour. Kaelt Simpson came for one thing, and one thing only: UMD’s science facilities. The tile floors of the Swenson Science building gleamed. The equipment, like the spectrometer, the centrifuges, and the electron microscopes, all promised exciting projects to come. Kaelt went from room to room and realized UMD would be the best place for her to experiment with her passions. “UMD offered the exact major that I wanted to pursue, and I was so impressed with the facilities,” says Kaelt. “I knew this is where I wanted to be.”

It wasn’t always easy. Becoming a UMD student took time and perseverance for Kaelt. She lived in Germany for almost eleven years before coming to UMD, and a few days before her flight to Minnesota she received bad news. Kaelt was told that because she wasn’t a resident, she would have to either pay full tuition or wait a year to enroll. Kaelt decided to wait; however, she did not let the delay discourage or stop her. Instead, Kaelt took many Advanced Placement exams which tested her out of introductory college classes. She also joined the UMD Chemistry Club which created relationships with faculty and soon-to-be fellow Bulldogs.

Kaelt is a triple major in German studies, chemistry, and biochemistry. She is also minoring in biology. “I have always been curious about the world,” says Kaelt.  Averaging 18 credits a semester and holding many part time jobs, Kaelt will still graduate this spring. “I have added majors and extra classes, but the goal has always been to graduate in four years with no debt,” says Kaelt. 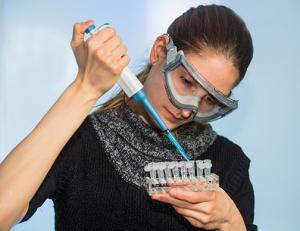 The scholarships and paid teaching assistant (TA) opportunities have helped Kaelt reach the debt-free goal. Since 2014, Kaelt has been the recipient of ten scholarships. The most recent scholarship was the American Chemical Society award given to her by the Lake Superior Section. Other awards include the Minnesota High Tech Association Foundation Scholarship, the Warren F. Davis Scholarship, and an undergraduate teaching award. Kaelt has also been selected as a paid TA for the last four semesters. “The Chemistry department has been so helpful in awarding me these scholarships and letting me be a TA,” says Kaelt.

Kaelt serves as the chemical coordinator for the Chemistry and Biochemistry Club, and she is the only tutor for the German studies program. She has also done research at UMD while participating in Undergraduate Research Opportunity Programs, Summer Undergraduate Research Opportunity Programs, and assisting Dr. Erin Sheets in her research lab. “Dr. Sheets has been my teacher and my mentor, and she has been such an influence in my four years here,” says Kaelt.

The chemistry department has been a big help in Kaelt’s four years at UMD. “The professors and staff are always willing to answer my questions and help me find the resources I need,” says Kaelt. “They are fast, thorough and extremely professional. They really care.”

Life before UMD was a whirlwind for Kaelt. At nine years old, she moved from the high desert of California, to Oregon, and eventually ended up in Germany.  She knew only three words: ‘yes’, ‘no’, and ‘apple,’ when she arrived. “My first day of school in Germany was terrifying,” says Kaelt. “My dad handed me a pocket dictionary and told me that we would go over sentence structure when I got home.”

Although she has always been able to retain information quickly, Kaelt struggled. “The most frustrating thing is to understand someone and have no idea how to communicate back to them.”  Yet the experience gave Kaelt perspective. “I have a lot of empathy for international students,” says Kaelt, “They’re in the same place as I was, and I understand how difficult that is.”

UMD will not be the end of Kaelt’s academic career. In mid-June, she will be packing her bags and heading to University of Oregon for their Polymer Chemistry Graduate Program. She will be placed in an intensive summer program which will be followed by an interview process for for a nine month industrial internship in Eugene, Oregon. The polymer program works with rubber, plastic, and paint coating among many other kinds of manufacturing materials. “It’s a hands on experience to work with versatile materials,” she says.

Ideally, Kaelt would like to work in the biochemical research field to develop safer processes for industries to remove harmful materials and create products to ensure public health. However, she is keeping an open mind to other career opportunities. “Chemistry is so applicable in modern day companies,” says Kaelt. “It’s everywhere.