From day one, UMD students are encouraged to get involved on campus. Being active in UMD’s Criminology Club has provided Jacob Boor and Georgia Gales (shown above) with leadership experience, networking opportunities, and helped them and other club members to gain perspectives from the speakers they have brought in this year.

Georgia is a junior, double majoring in criminology and sociology. In high school, she thought she'd go to college to study business but decided to switch her focus when she discovered, “Crime is interesting to me.”

She initially intended to go into law enforcement but now she confesses, “I have no idea.” The array of career areas that graduates with criminology degrees can go into are wide and varied. “There’s working as a probation officer or working in prisons or with juveniles. There’s also working with victims of domestic violence or sexual assault,” says Georgia.

Jacob came to UMD knowing he wanted to study criminology. “I took a high school class, and I really like it,” he says. Jacob, a sophomore double majoring in criminology and sociology, plans to go into law enforcement.

Both Georgia and Jacob got involved with the Criminology Club last year. This year, Georgia is club president and Jacob is vice president.

Together they’ve worked with Criminology Club advisor Associate Professor Scott Vollum, Department of Sociology-Anthropology, to bring in speakers who can provide the club with various perspectives.

“A UMD police officer came to speak to the club. Also a former Duluth police officer, who had served in the Duluth Crisis Intervention Team and is now with the DNR,  spoke to us,” Georgia says. “It’s interesting to learn about their experiences and how they got into law enforcement,” Jacob notes. 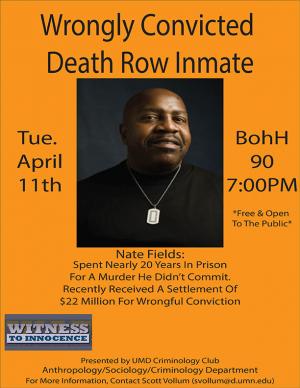 On Tuesday, April 11, they are bringing in a unique guest, Nathson Fields, who was wrongfully convicted of a double murder and spent 18 years in prison (12 of them on death row), until his conviction was overturned. The event will be held in Bohannon 90 beginning at 7 pm and is free and open to the public.

Mr. Fields was released from prison and awarded a large settlement after it was proven that the judge who had convicted him had taken bribes.

He currently serves as the board chair for Witness to Innocence, an organization dedicated to empowering death row exonerees and creating awareness about wrongful capital convictions and the aftermath for the exonerated.

“We want people to understand that the criminal justice system isn’t perfect and that people have spent time on death row for crimes they didn’t commit,” Georgia says.