Surfing and Shaping the News 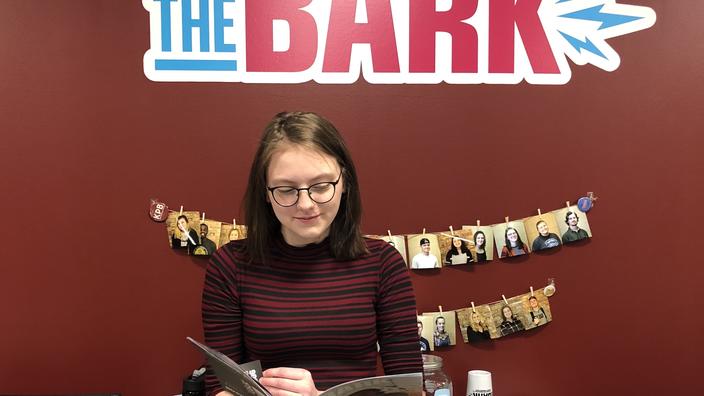 Lauren Sherlock turns left after the UMD coffee shop into Cina Hall. She glances down at her cell phone as the notification message flashes. It’s her news app. That could mean stories about business, politics, health, or current events. This time it’s world news, results of an election held in Europe.

Lauren is a senior communication major with journalism and political science minors. Getting accurate, up-to-date news is important to her, so she uses Apple News, the news app that comes on her phone. It’s a news-aggregation service that has tens of millions of users. Human editors to assemble and curate news.

“It updates me throughout the day about what’s going on in the world,” Lauren says, “I think everyone should have a news app on their phone.” She feels it is a less biased source. “I don't trust all the news I get on social media.”

She’s not alone. “Younger Americans who grew up within a disrupted media landscape are also more skeptical of the media,” says a report from the Media Insight Project — a 2018 initiative of the American Press Institute and the Associated Press-NORC Center for Public Affairs Research.  They cite, “Most adults age 18 to 29 view the news as fairly inaccurate, while most age 30 and above consider it fairly accurate.”

Social Media Sources
College students are shaping the way people receive news just by paying attention to one source over another.

For instance, communication major Sydney Richman uses Twitter as her primary news source. Like 67% of Americans, she uses social media to get her news. According to a 2017 Pew Research Center survey, 43% get news on Facebook. After that, “The next most commonly used site for news is YouTube, with 21% getting news there, followed by Twitter at 12%,” the study says. News from Instagram, LinkedIn, or Snapchat have fewer users.

The numbers don’t surprise Sydney. She uses trending topics and hashtags to make the app navigable and easy to use. “I usually find out about things through Twitter and read more about it through a news organization,” she says.

The Bark is following a national trend, where every major TV station, newspaper, and magazine, reports breaking news as it happens, not just at a predetermined release time.

"After changing our brand, we want to continue to expand our audience," she says. "The response we get from our readers shows our following is growing."

About the Journalism program

About the Department of Communication