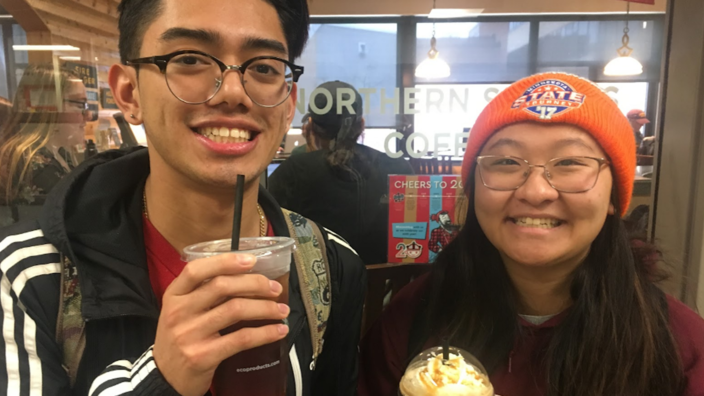 “White chocolate mocha with raspberry, two percent with whip!” A student employee calls out the order and slides a paper cup full of hot coffee across the counter. 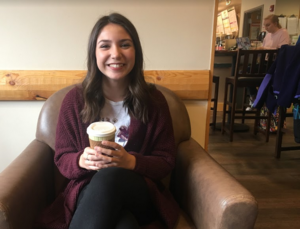 The Northern Shore Coffee Shop is bustling. Students are clustered together, waiting for their coffee, fidgeting with their phones, catching wafts of the thick, sultry musk of dark roast and espresso that flood the room.

“I’ve been drinking sugary, coffee drinks, lattes and mochas, since I was in ninth grade,” Brianna Taggart says. She’s a third-year journalism major from Wadena, Minn. “Over a half of the people I hang out with drink coffee.” Brianna’s friends are not alone.

That's a Lot of Coffee

Across the county, daily coffee consumption among 18 to 24-year olds has risen drastically. 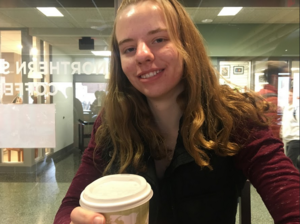 According to a 2016 National Coffee Association (NCA) in New York study, from rose from 34% to 48% in just one year. From Starbucks and Caribou Coffee to Dunkin Donuts, coffee has become a common necessity among university students.

Even on campus at UMD, coffee is hard to ignore. It can be found at Northern Shores Coffee Shop and in multiple places, including UMD Stores, the campus food court, and the dining center — which offers a Duluth Coffee Company brew. There are seven coffee vending machines for round-the-clock access and there’s a Starbucks right across the street from campus in the Bluestone shopping center.

According to the 2016 article, “Look how much coffee millennials are drinking” in The Washington Post, people in the age group between 19 and 34, are driving and pushing the coffee demand to “historical records.”

UMD students are part of the trend. For instance, take Laylia Yang, second year student from Cottage Grove. “I tend to drink more or less coffee depending on what tests and quizzes I have that week,” she says.

There are multiple reasons to explain why coffee suddenly is on the rise with young people. The Washington Post writes that the coffee trend among millennials and younger generations stems partly because “coffee has everything millennials love: status, experience, and personalization.”

Is there status in being cool? One student thinks so, “I first started drinking coffee because I thought it made me cool,” Brianna says, “It’s weird I know.”

“I didn’t originally like the taste of it, but I made myself like it by starting on the really sugary drinks," she says. "Now I drink it because it’s become routine to drink it, and I feel like my day isn’t totally complete until I drink coffee.”

Not as weird as she may think. Others have a similar experience.

“I do drink more coffee since I have gotten to college,” Dora Linton says. A sophomore from Chetek, Wis., Dora says “specialty, limited time only, and seasonal” drinks have an attraction. “Coffee shops around here offer personalization. It's fun and the coffee tastes great.”

Because of the extreme appeal coffee has for college students, coffee companies are aiming aggressive marketing campaigns at them. Coffee sales account for around 20% of on-campus food sales with an average spending amount on coffee around $100 a month, according to a 2014 article in Entrepreneur magazine.

The sales data indicates the trend isn't ending soon. For years to come, expect to hear, "One iced decafe vanilla latte, with a dollop of whipped topping, please."

About Dining at UMD