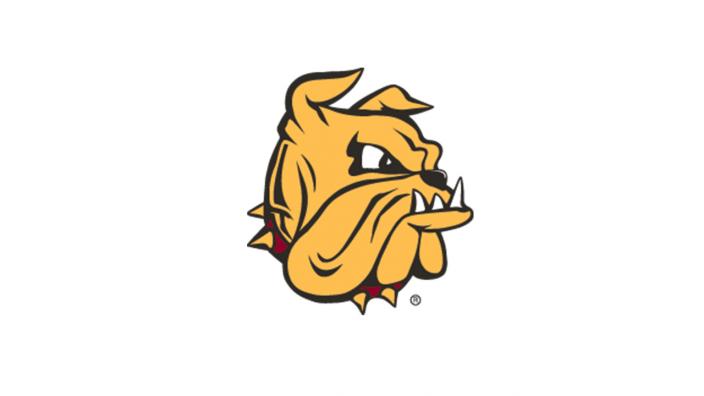 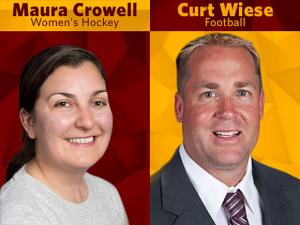 UMD Head Women's Hockey Coach Maura Crowell and Head Football Coach Curt Wiese have both signed three-year contract extensions that will keep them on the Bulldog staff through the 2021-22 and 2020-21 seasons, respectively.

"We are ecstatic to have coach Crowell and coach Wiese guiding our great women's hockey and football student-athletes," said UMD Athletic Director Josh Berlo. "Curt and Maura have been incredible representatives of Bulldog athletics leading their programs to great success in the classroom, community and competition.  We are proud to call both of them Bulldogs."

In just two seasons at UMD, Crowell has compiled an overall record of 40-28-6, including a Western Collegiate Hockey Association postseason mark of 5-2.  For her efforts during the 2016-17 season, Crowell was named the USCHO Division I Women's Coach of the Year, as well as the the CCM/AHCA Division I Women's Ice Hockey Coach of the Year Award for 2017.  Crowell was also crowned the 2016-17 WCHA Coach of the Year after she guided UMD to its biggest turnaround in program history with 25-7-5 overall record and the Bulldogs first NCAA Quarterfinal game at home since 2010.

On Crowell's watch, the Bulldogs earned 19 WCHA wins in 2016-17, the program's highest since the 2010-11 season, and finished third in the ultra-competitive WCHA.  In addition to landing in fifth in both national final season polls, UMD had a Patty Kazmaier Top-3 Finalist, two All-Americans, and a run on league awards last season, including 2016-17 WCHA Player of the Year, Defensive Player of the Year, and WCHA Student Athlete of the Year.  The Bulldogs had five players placed on All-WCHA Teams, and tacked on a program-record 10 WCHA Scholar Athletes in 2016-17, as well as a program-high 16 WCHA All-Academic Team members.

"I am thrilled to extend my contract through 2021-2022 at the University of Minnesota Duluth," said Crowell.  "I appreciate Chancellor Black and Athletic Director Josh Berlo's clear commitment to the future of our program.  We are proud of all that our student-athletes have accomplished both on and off the ice the past two seasons, but we also know it is just the start. Our return to the national tournament last spring was a significant step in the right direction and I firmly believe we have the pieces in place to vie for national prominence year in and year out moving forward."

Since taking over the head football coaching duties in 2013 following a five-year stint as UMD's offensive coordinator, Wiese has rolled up a 43-8 record  -- only one other NCAA Division II coach has more victories during that stretch -- while leading UMD to four Northern Sun Intercollegiate Conference North Division crowns, three NCAA II playoff appearances (2013 2014 and 2016), one overall NSIC championship (2014), one Mineral Water Bowl title (2015) and one perfect 11-0 regular season (2014).  He's also helped produce 17 different All-Americans, 27 All-NSIC first team selections and one NSIC Defensive Player of the Year.

Wiese, whose .843 winning percentage is far and away the best of any head coach in UMD's storied 84-year history, was selected the 2013 Liberty Mutual Coach of the Year Award winner for Division II, a prestigious honor recognizing coaches for their responsibility, integrity, sportsmanship and excellence, on and off the field. Last fall, he was one of 10 head coaches from across the nation who were up for the 2016 Allstate Insurance Good Works Team for his commitment to community service

"I am extremely grateful and appreciative to Chancellor Black and Athletic Director Josh Berlo for providing me with the extended opportunity to lead Bulldog football," said Wiese.  "Being a part of this great program for 10 years and now getting a contract extension is exciting for myself and my family.  I'm so fortunate to be surrounded by such a tremendous staff as we continue build upon the Bulldog tradition of excellence."