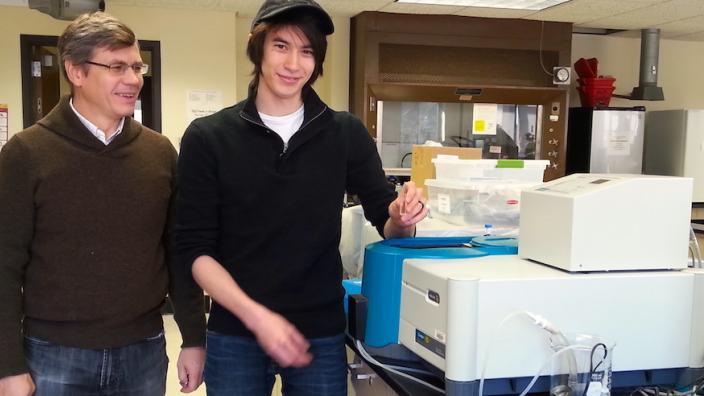 They've gone from organic, to physical, to inorganic chemistry. Now he's an undergraduate researcher, working with Professor Victor Nemykin, analyzing light harvesting molecules through experimental techniques and trying to model the experiment with theoretical/computational chemistry. Although it's complicated, Alexander and Prof. Nemykin have no trouble explaining the project so others can understand it.

When Alexander King graduated from Superior High School, in Superior, Wis,. he had no idea he would someday be working on a solar energy project. But, his interest in science was so strong, it's not surprising he landed in one of UMD's most advanced science labs. "I had a deep love for mathematics and learning how the universe worked," he says. Alexander attributes this fascination to his high school math teacher, Mike Beelby. "He showed me how everything can be connected through mathematics."

Inspired by Plants
"Using nature as an inspiration for developing technology is nothing new," said Prof. Nemykin. Light reflecting screens instead of light projecting LCD monitors take their inspiration from the sheen in butterfly wings. Velcro was modeled off the way burrs stuck to dog fur. The light harvesting project gets its inspiration from plant leaves.

Nemykin's team starts with Buckyballs, spherical molecules of carbon which are found in plants and look like soccer balls. They are shown as green spheres in this diagram. The team has found a way to join the Buckyballs together using other molecules (the gray structures) in a defined, symmetrical pattern. The configuration allows the transfer of light generated-energy between two contacts in a chip.

The Key Lies in Nature
We know that plant cells absorb sunlight and turn it into energy that helps the plant grow. Prof. Nemykin and Alexander are drilling down to the molecular level to develop a solar cell that mimics the way a plant cell works.

That sounds easy, but to explain the way it really works takes pages of molecular diagrams. The bottom line is that Prof. Nemykin, Alexander and other students have discovered "channeled" molecular structures that can potentially be used in dye-sensitized solar cells or organic photovoltaics.

Nemykin's team starts with Buckyballs, spherical molecules of carbon which are found in plants and look like soccer balls. The team has found a way to join the Buckyballs together using other molecules in a defined, symmetrical pattern. The configuration allows the transfer of light generated energy between two contacts in a chip.

The actual manufacture of the chip is the work of UMD's Dr. Zhihua Xu, a material science expert in the UMD Department of Chemical Engineering. Xu has developed a polymer that can house the light harnessing molecular structure.

Refinement is Progress
The excitement is palpable. The device works but Prof. Nemykin isn't satisfied. "Our goal is to make the cells more efficient. That will make them more cost effective.

Victor Nemykin
Prof. Nemykin has been teaching and conducting research at UMD for 12 years.

He has authored over 170 papers and received numerous fellowships, grants, awards, and honors. This year, he will receive the 2016 UMD Award for Distinguished Research.

He has praise for UMD. "We have a good group of enthusiastic faculty. We conduct cutting edge research, and we are proud of our students."

The list of undergraduate and graduate students that have conducted original research under Prof. Nemykin's watchful eye is long indeed. This year, in addition to Alexander, he has a number of other students working on the light harvesting research. "Current graduate students Hannah Rhoda, Mahtab Fathi-Rasekh, Cole Holstrom, Tanner Blesener, and Mathew Kayser have also contributed to the project," he says.

Alexander feels the pull of Prof. Nemykin's research and his graduate student team. While Alexander is looking at several graduate schools and someday a doctoral program, he's crossing his fingers that the master's degree will be from UMD.

Are chemistry classes for you? UMD Chemistry and Biochemistry Department.