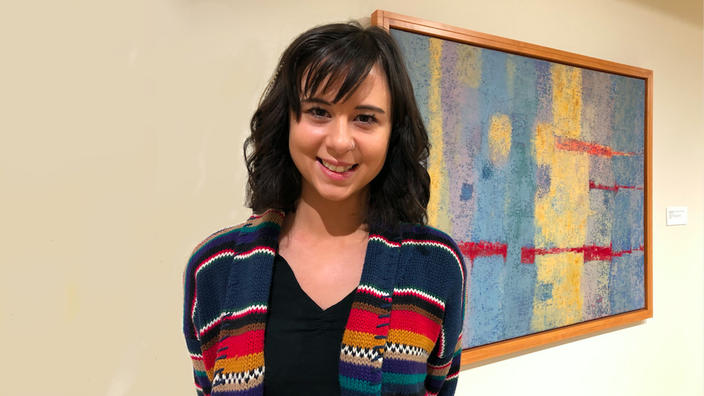 A Master of Social Work student explores medicine, religion, and the cycles of life.

Charlie had found a room in the basement of a house rented by the Ferris State Marching Band, but it was break, and everyone had gone home. Her car insurance had run out, so she was walking. Snow filled her shoe. It was coming through the rip in the sole. She had repaired it once with “shoe goo,” but as she trudged along, the sole started to peel off. She pulled her flip phone from her pocket but it had run out of minutes.

It was 2013 and Charlie Ann Boverette was determined to get her bachelor’s degree. She had studied and turned in papers non-stop until the semester was finally over. “I was so pleased that my grades were good,” she says. “One teacher even said I should send one of my papers to a journal for publication.” But the drive to get through her first semester as a transfer student at Ferris State had left her without cash.

That’s when Charlie contacted her advisor, Professor Michael Berghoef. “First he lent me his cell phone so I could call my mom.”  Another professor found her a winter coat. After that, her advisor helped her apply for scholarships to cover the rest of her tuition and an emergency scholarship for immediate help.

That day has long passed, but the memory of difficult times growing up and her struggle to get an education has stayed with her. Charlie is in her first year of the Master of Social Work (MSW) program at UMD. “I think of my family and the people who helped me every day I am here,” she says. UMD is supporting her studies in several ways, including the Professional Education Diversity Fellowship.

Many experiences have shaped her path. Her background includes Canadian Métis ancestry and she identifies as an Indigenous person.  As a teen, she volunteered at the nursing home in Michigan where her mother worked.

She excelled in school and became the first person in her family to receive a high school diploma. She was hired for a student position on a community improvement project sponsored by the Kellogg Foundation, and her path took turns.

She received her A.A. degree Kirtland Community College. She worked in nursing homes and as cosmetologist. She supported herself and her family and constantly worried about having adequate food, housing, and health care.

After Ferris State, where she graduated with a 4.0 grade point average, Charlie’s academic endeavors took off. She received a master’s degree in religious studies from Western Michigan University, and now has landed at UMD.

Charlie says she came to UMD’s social work program because of its strong connection to American Indian populations. “Compared to other university settings I have been in, this is the most ‘Native-centric’ by far,” she says. The University of Minnesota Medical School, Duluth campus played a part as well. “It has one of the highest American Indian faculty ratios of any U.S. medical school,“ she says.

There are many aspects of Indigenous culture that Charlie wants to explore at UMD. “I’m interested in animism, traditions, and ceremonies like the spirit fire,” she says. “I want to do more research on traditional understandings of death and dying.”

Charlie reflects back to her nursing home experiences. “I think about the earth and what it means to be a Native person. I enjoyed hospice work and found it meaningful to be with a person who’s experiencing death and dying.” That line of inquiry led her to publish an article in a peer-reviewed journal on Green Burial and the deinstitutionalization of death when she was at Western Michigan.

Charlie’s already having an impact at UMD. She was part of a fall inter-professional healthcare ethics panel discussion at a University of Minnesota conference this fall, and she is meeting with people on a joint project with the Center of American Indian and Minority Health and the MSW program.

Whichever direction Charlie takes, she’s sure to make an impact on UMD and the surrounding communities.

About the Master of Social Work degree

About the Professional Education Diversity Fellowship