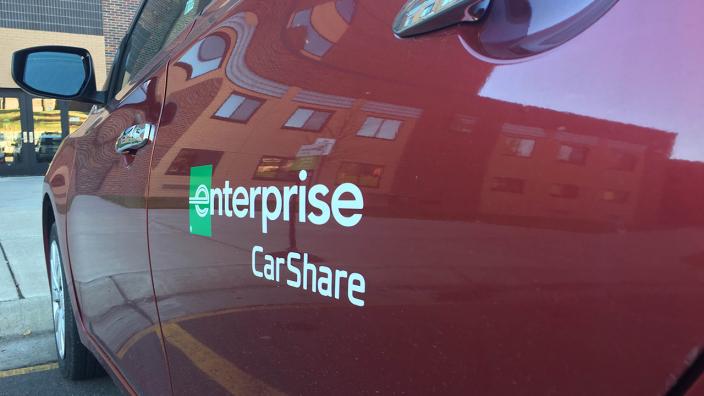 Wheels when you need them.

Transportation in college can sometimes be difficult to navigate, hard to come by, and even harder to maintain, but Enterprise Car Share at UMD helps to make those things a lot easier.

UMD students and the Office of Student Life were integral to getting the car share program to campus. One of the students at the time was, Freshman President, Mike Kenyanya.

“It’s an alternative method of transportation for students,” he said.

Mike remembers the beginning of last year when the freshman committee was looking for things to do. They were interested in what other student associations were doing, and it wasn’t long until Mike found the car share programs.

Mike says UMD had already been thinking about the same idea, the thoughts were there but once the students brought it up and kept moving it along, it was easier for administration to really go for.

“Our roles as the students were just to push it,” Mike said. “Students wanted it.”

At the time, St.Scholastica was looking for a similar program as well. The two schools were able to work together and find a program that worked for both of them. That program, of course, was Enterprise.

It doesn’t need to be the primary mode of transportation for students Mike says. “But it’s really convenient. No gas, no looking for parking, and it’s insured.”

“It’s a great service, and a great way for kids to get around,” said UMD student and Car Share Brand Ambassador Intern Kallie Quinn.

With the country-wide, inexpensive program now at UMD, Kallie’s job is to table so that students know about the “One more great service UMD offers.”

“Car sharing is a really green way to get around, and it’s very sustainable.” Kallie said. She also says it’s another way that UMD shows they care about their students “It’s the perks of having a car, without owning a car.”

Mike and Kallie both can’t help but notice what a great asset it can be for international students, many of whom perhaps don’t have cars. Kallie says even for things like just going to get groceries, it’s extremely helpful.

Another part of Kallie’s job is making sure the cars, a Nissan Sentra and Nissan Rogue, are always kept clean with freshly changed oil. She also takes part in the $1 application process. Kallie says the registration fee will go up come January so make sure to do it now. Following the first $1 fee the cars are $5 an hour.