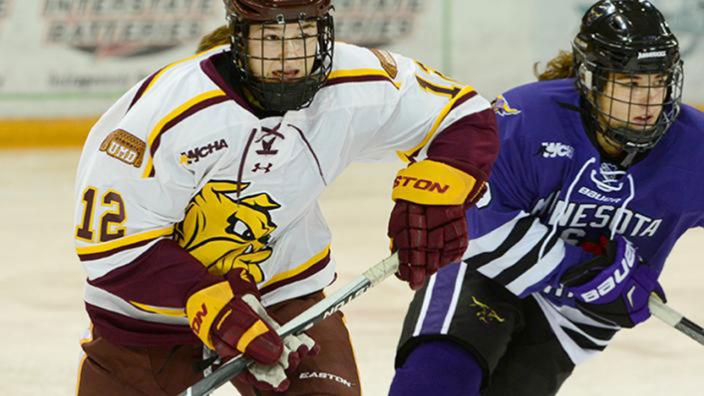 Maneuvering purposefully through academics and in the arena, a rigid regimen helps the sophomore excel in both. Done with class at 1 p.m., she'll eat and do homework until practice, suit up with the Bulldogs until 8, do some more homework, and finally hit the sack before midnight.

The only exception to her routine is game day, when all brainpower is dialed in on winning. Instead of homework, Catherine will write down her targets– "work hard, play physical, meet the other team's strategies." She'll get to the arena a couple of hours before the game, tape her stick, and get warmed up. Fans might hear a little bass from Pitbull and Ke$ha's "Timber" sneaking under the locker room door. "It gets us energized," she explains.

On the ice, Catherine is a goal-scoring defenseman who hasn't stepped foot in the penalty box all season. On campus, she's a 4.0 student with an uncanny enthusiasm for physics. She wedges a divide between the two, "Sometimes I think about what amount of force I'd need for the puck to go at a certain speed, but I wouldn't actually do the math during the games. I'm very focused."

Head Coach Maura Crowell has noticed. "Catherine is a fantastic representative of what it truly means to be a student athlete. She is passionate about her studies in mechanical engineering and equally passionate about playing hockey." This is Catherine's first season with Coach Crowell, who describes Catherine as a key member of the defensive corps who thinks the game of hockey very well.

Catherine has been "thinking hockey" practically her whole life. Lacing up her skates at four and following her older brother onto the rink, Catherine simply replies, "I'm a Canadian," when asked to explain her love of the game. To her, that's the "why" and it's big enough to check any ancient question of women playing a male dominated sport.

Catherine's also uniquely female in her mechanical engineering major. But similar to how her Canadian citizenship trumps thoughts of hockey and gender, to her, a unique love of math and physics is the "why." She's contemplating pursuing a master's in aerospace engineering so that she can design spacecraft someday. It's not the actual building that appeals to Catherine, but the theoretical. "I love to do the math, calculate the amount of force that you can put on something before it breaks."

It takes a lot of force to excel in both athletics and academics, and Catherine braces against the breaking point with hardline timelines and an uncomplicated view of success. There's no minutia in her maneuvering, only projectile motion.