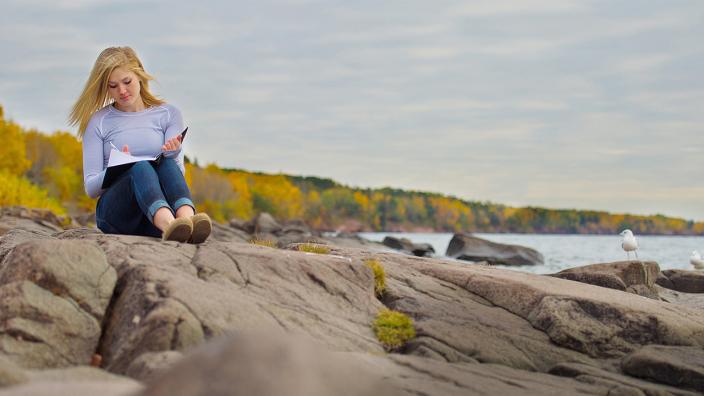 Duluth called so loudly this Bulldog is willing to face-off against her sister... a Gopher... who's also her best friend. 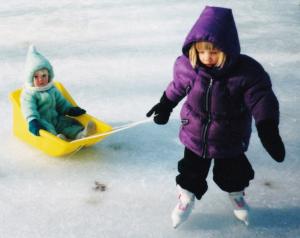 Reagan Haley gets pulled by her older sister Paige in Red Wing, Minn.

Reagan Haley can't even remember the first time she was on ice skates, but says she really started getting into hockey as a first grader.

She grew up in the bluffs of Red Wing, Minn., where stepping onto the ice when you're still mastering baby steps is pretty normal. "Mr. Hockey" Johnny Pohl is from Red Wing and a slew of Division I players call the Mississippi River town home. "When you have a small town culture, without a lot to do, you play hockey," Reagan explains. "That's why our program is so strong."

Her older sister by 14-months, Paige, was right there with her. The girls' dad was their coach at the arena in Red Wing, just a five-minute drive from their house. The sisters even skated on the same line in high school, and Reagan says they share a 'twin telepathy.' "We joke about how I'll pass the puck to her before she even calls for it."

It seems like a recipe for rivalry, but Reagan says they were more BFFs than most sisters. They would shoot pucks during their free time and pushed each other to be better.

Hockey players decide their post high school paths early. At only 15, Reagan had to commit to her collegiate play. Her sister Paige was a Gopher and Reagan considered joining her, "She's my best friend so I thought about it really seriously."

But there was something about Duluth. UMD was on the top of her list from the very beginning, as Reagan knew she wanted to play at a WCHA school and be close to home. Family vacations were on the North Shore and there was also some nostalgia. So when she visited campus, there was no question. "When I was up here, I knew this was my school."

With that, an era ended. Instead of being on the same line as her sister, they'd be facing off in programs known for their epic rivalry.

One of Reagan Haley's favorite spots is Duluth's Brighton Beach.

From sisters and teammates to WCHA rivals– not an easy transition. But Reagan says its been softened by all the reasons she chose Duluth.

On rare time-off, Reagan explores her chosen city. "I think I've gone to every park, but I'm still discovering more."

When Paige visits, Reagan will point out what she's missing at the U of M Twin Cities. "I always give my sister crap when she's here. I'm like, 'Look at Lake Superior. I get to look at that every day and you're in the city. Come on! This is awesome!"

On the ice, this friendly rivalry is sharpened by athletic purpose– getting the win. But down the road, after graduation, they plan on living together again. Both are education majors and joke about teaching at the same school where kids would ask, "Which Ms. Haley do you have?"

Until then, local fans will continue to cheer for the Ms. Haley they have, the one whose love of Duluth was enough to guide her home. "I love it here. This is my town."