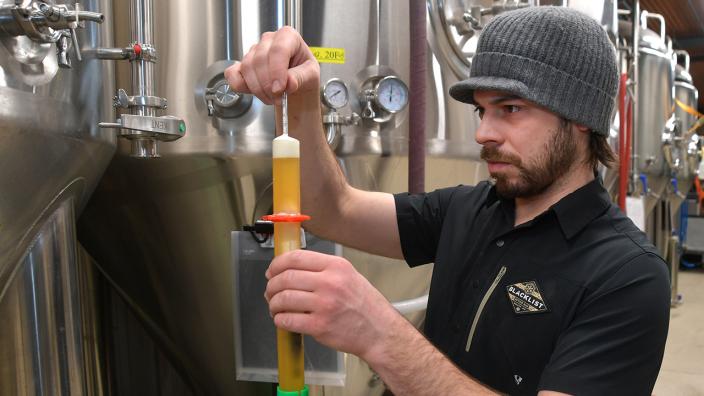 UMD grads are pivoting towards careers in craft beer.

The way Brian Schanzenbach remembers, it was exactly like when Harry Potter got Severus Snape’s copy of Advanced Potion Making. “In biology lab, they gave us our lab book and there was a chapter on fermentation and making wine. The professor said, ‘You can’t do this here, but you’re welcome to take the book home.’” With that, the purpose behind Brian’s biology major bubbled to the top. “I think that weekend I was buying the jars, the grape juice, and the yeast. I wanted to do it right away. Something just clicked.”

From there, Brian honed in on microbiology and supplemented his UMD education with experiential learning at Fitger’s Brewhouse and Lake Superior Brewing. “I really lucked out–going into biology and not knowing what I wanted to do with it, and then finding something that I’m so passionate about.”

That something is beer. And it turns out that Brian, now a brewer and co-owner of Blacklist Artisan Ales, is not alone in being drawn to this amber nectar. Like bees to honey, packs of Bulldogs are gravitating toward an industry that’s enjoying a boom, according to the Brewers Association. It reports 5,562 breweries were operating in the United States in 2017. CityLab reported that between 2008 and 2016, the number of brewery workers grew by 120 percent. And Minneapolis, Saint Paul Business Journal ran a story in December with the telling headline, “Duluth Is a Top Five City for Beer Drinkers,” announcing that the Zenith City surpassed other craft beer beacons like Austin, Texas, and Missoula, Montana, by earning high scores for both its offerings and its venues. 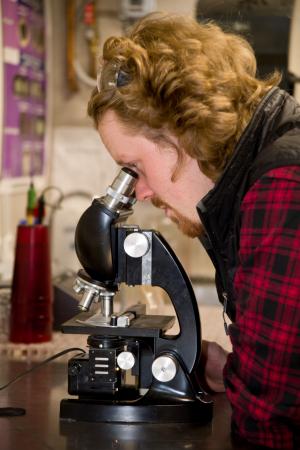 UMD grads are playing major roles in Duluth and across the nation. Several alumni were science majors, like Brian, but all five colleges are well represented in the craft beer profession. Why is it that so many students who choose UMD are also choosing to pour their passion into this niche industry? It turns out UMD and craft beer are attracting the same people. School of Fine Arts alumna Jodie Pundsack, who’s built brand campaigns for several breweries, surmises, “That collaborative, ‘let’s make some things,’ type of people are drawn to UMD.” Jonathan Portinga, a Labovitz School of Business and Economics grad and Bent Paddle brewer, puts it this way, “If you value what Duluth has, craft brewing has similar people who would enjoy that.”

But it takes more than enjoying craft beer to succeed. These grads have the know-how needed to knock out a living in this competitive field. 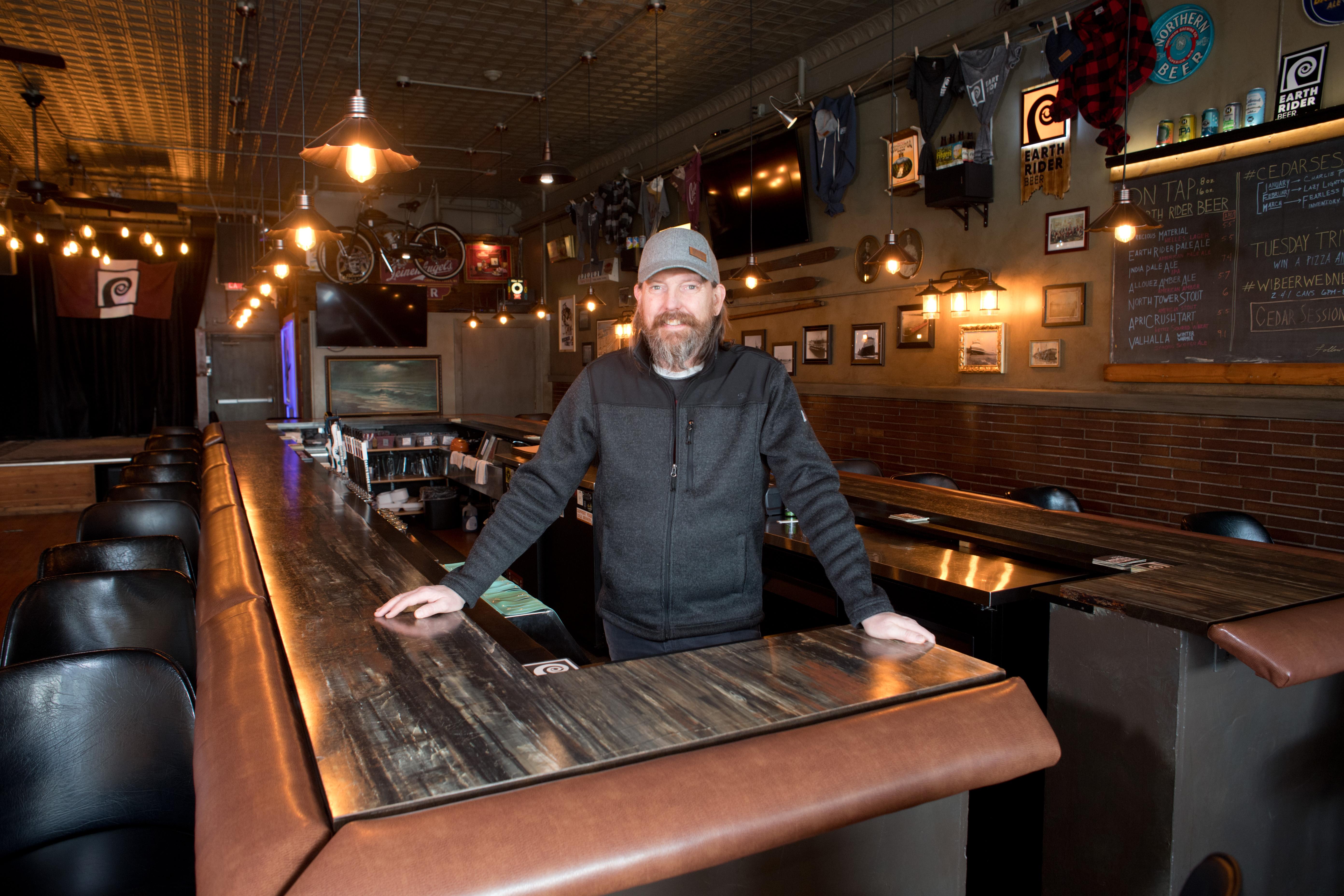 Growing up in Brainerd, Minnesota, in the 1970s, Tim Nelson’s room was not decorated like his buddies’ rooms. Where they may have had “Jaws” posters on their walls, Tim had ads for Schlitz Malt Liquor. Tim’s parents, who didn’t drink, let this slide, understanding their son had a penchant for marketing. Tim and his brother Brad were known around town as being the top sellers of sloppy joe fundraising tickets, especially impressive because they had to peddle their bikes  miles into town before peddling their wares.

Tim came to UMD in  after two years at a community college, in part to start a varsity cross country ski team on campus. It was at the NCSA National Championships in Bend, Oregon, where he first became aware of craft beer. Sipping a Deschutes Black Butte Porter, “That was my first taste,” he remembers.

At the same time he was learning about micro beer, he was enveloped in a microcosm of what was happening in Duluth. “Hanging around the recreational sports students at UMD, I got to know people who were adventurous, liked to travel, and liked to drink good beer when they’re in those locations. That stoked my knowledge of people.” Through them, Tim saw a market for a local brewery.

After graduating with a degree in marketing and a minor in history, and returning to Duluth after graduate school, Tim launched Fitger’s Brewhouse. “We were working for free and it was a grind, introducing people to microbrews one pint at a time.” Tim says, in the early days, they’d host adventure slide shows where people like a local Bigfoot hunter would share pictures from their trips. It was one of only five breweries in the state.

One of Tim’s favorite sayings is you can’t make excellent beer without an excellent location. This motto served as a guide after he sold the Brewhouse a couple years ago and began launching a new brewery. “There’s a lot of beer to choose from in the world. If you can only have one beer that night, what kind of beer is going to make you feel the best? Location has a lot to do with that,” he explains. “Stripmall beer, there’s nothing wrong with it, but it has a different feeling. That’s not what I wanted.”

Tim wanted his new business to be on the harborfront and initially looked in Duluth, but he ended up crossing state lines and tapping into his family’s roots. At the base of the highbridge and in the shadow of Superior, Wisconsin’s shipyards and silos sits Earth Rider Brewery. “Earth Rider has a bit of that ruggedness, and this location speaks to that. We’re right at the tip of the lake, and it’s as windy and cold as it is anywhere.” 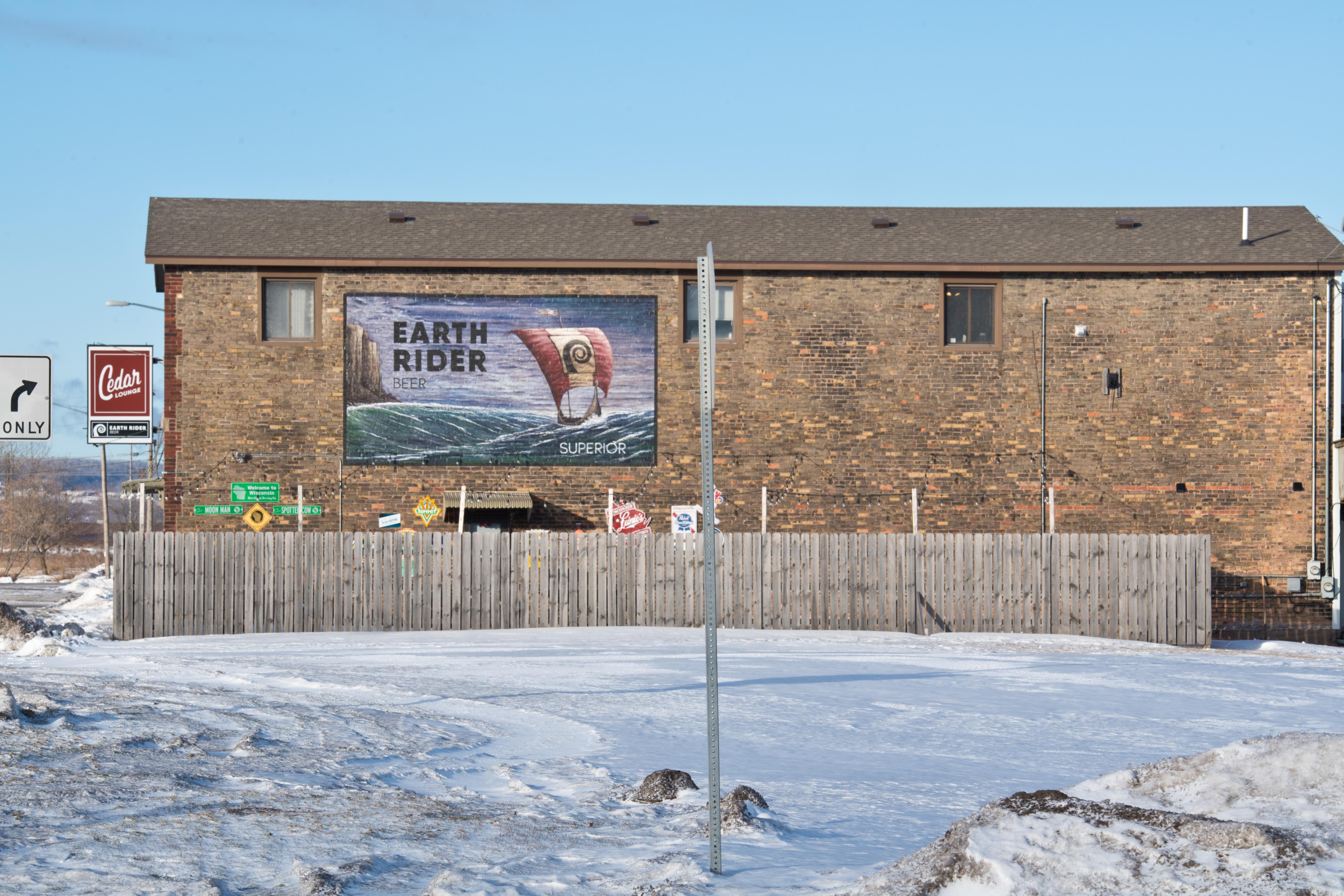 Earth Rider opened one year ago, after Tim gathered a team of well-respected brewers and surged forward with a tightly defined brand whose muse is its location. “The Earth Rider brand is tied to adventure and exploration. It’s tied into our immigrant culture.” This hardworking storyline is personal for Tim, whose grandparents lived in Superior. His great grandpa Nikolia Nelson, a Norwegian immigrant, owned Superior’s Imperial Bakery and had the first motorized delivery vehicle in Superior. His grandpa Fred Nelson worked in Superior’s shipyards during World War II. And his great grandfather Martin Carlson, a Swedish immigrant, worked for the railroad.

The Cedar Lounge, about a block away from the brewery, honors these roots while serving as Earth Rider’s taphouse. It’s an authentic Wisconsin bar with tin ceilings and antique photos of ore boats covering the walls. Having Earth Rider beer on tap echoes the original purpose of the  building, as it was built as a tide house, a business that would only sell one brewery’s beer, for Northern Brewing Company.

A sign of success, Tim says, is that you’ll find beer connoisseurs sitting next to grain elevator workers at the bar. “I want to make beer for the people who live and work here. That’s what craft brewing is all about to me.” 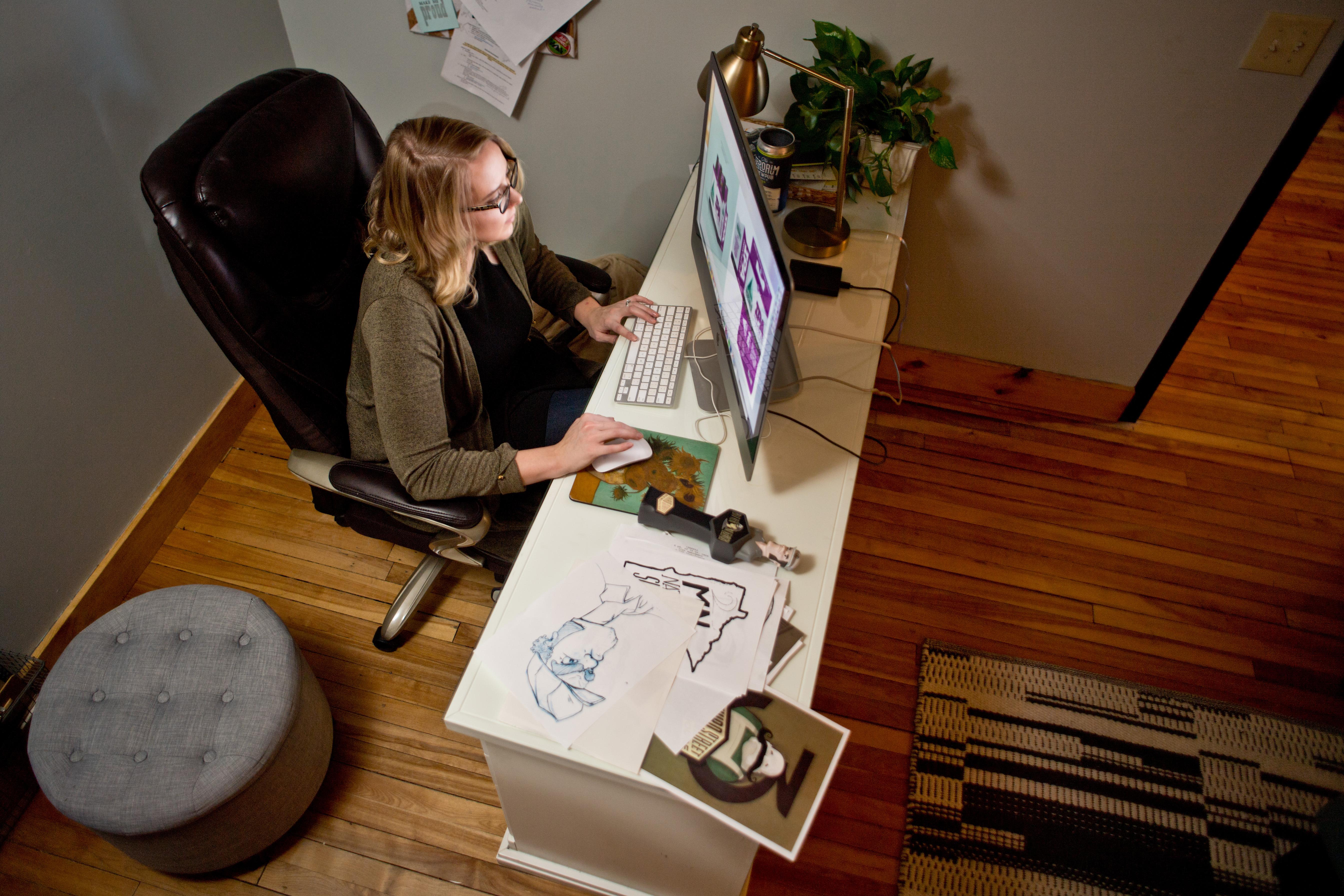 Like an ore boat captain, two decades of experience and an innate understanding of brand means that Tim is able to steer Earth Rider into the sea of craft beer without running aground. This is unique. Most breweries start with a great product but aren’t sure how to find the right audience. Enter into the wheelhouse Jodie Pundsack of Gaslight Creative.

Jodie’s mom was a designer, so art is in her veins. Jodie studied graphic design at UMD where, for her first semester, using the computer for design was minimized. “What I love about UMD is that you learn the basic principles of design through drawing. The software programs are just tools.”

This education in handcrafted design is now empowering her work with handcrafted beer. Jodie and a colleague started Gaslight Creative in , a marketing agency in St. Cloud. As the first rumble of what would be a surge in craft breweries was being felt, Cold Spring Brewing reached out to Jodie’s agency to empower its launch of Northern Beer and to design its website. Gaslight was so appreciative of the opportunity, it replied with a dancing gorilla.

Knowing a good thing when she found it, Jodie and her team started attending craft brewer conferences. “You bring the beer, we’ll bring the brand. Let’s party,” was their tagline. Underneath the apropos fun was a foundation of education, “My success as a creative strategist is based on what I learned at UMD.”

The significance of her work is not lost on Jodie. “Branding is so personal, and this is these brewers’ craft. To have the honor of their trust is the most meaningful thing.” 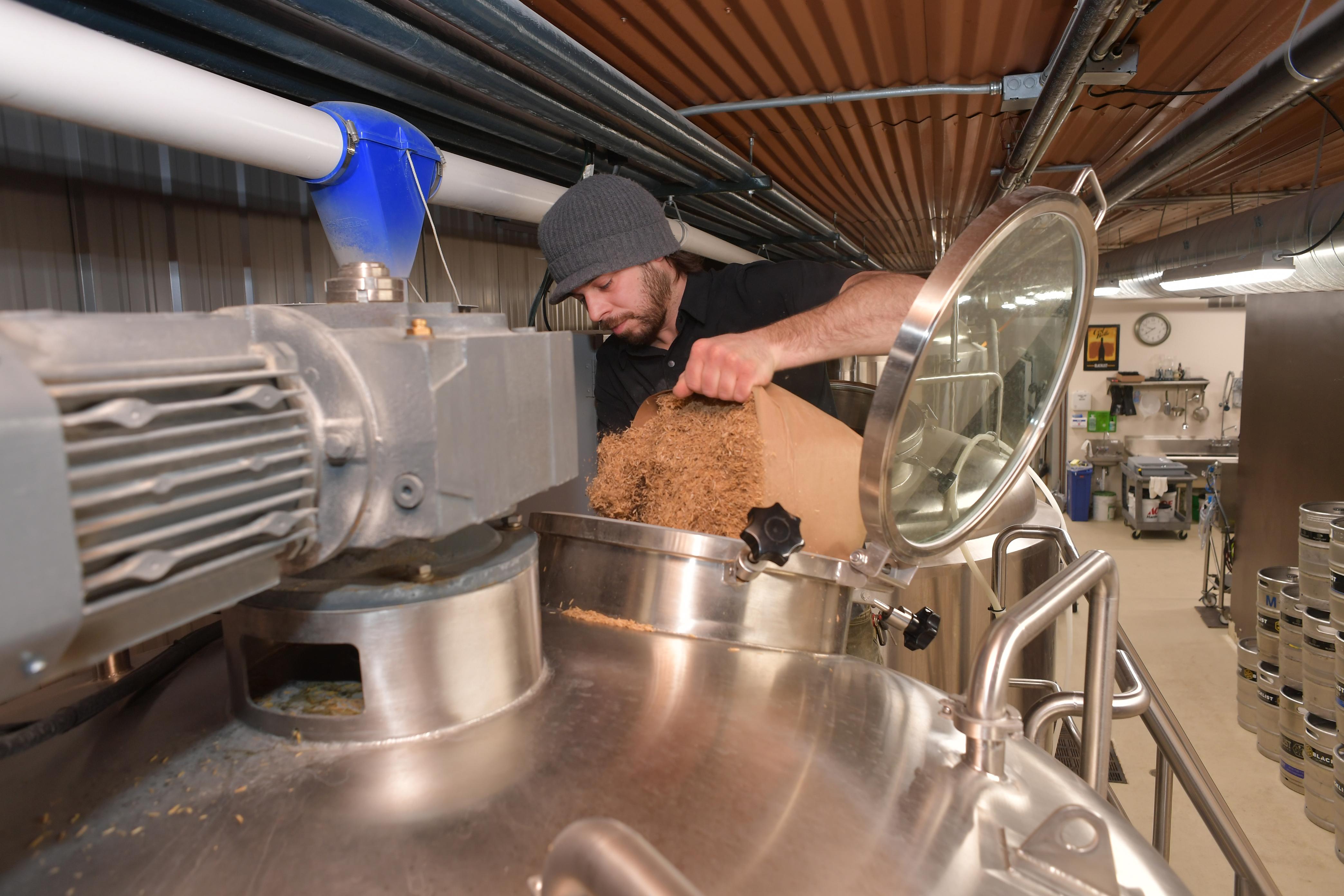 For years, the headshop Last Place on Earth loomed on Duluth’s Superior Street. Waves of customers would surge in and out of the building, causing people working and visiting downtown to ripple away from the space. It was shuttered with gusto in  and reopened as Brian Schanzenbach’s Blacklist Artisan Ales three years later.

Transforming the 5,700-square-foot space in Duluth’s Historic Arts and Theater District into Blacklist has had a reverse effect on the aversion caused by Last Place on Earth. There’s live music and a taproom upstairs and a busy brewing and canning operation downstairs.

The long, skinny building nestles against Michigan Avenue in the back, perfect for distributing Blacklist’s  gallons of Belgian-style beer. It’s not a huge operation, but it’s the perfect size for a brewer who’s always had an eye for the micro. “Big breweries are amazing at what they do, but it didn’t really spark an interest in what I wanted, which is more hands-on.”

Working at his craft, Brian says, taps into both his UMD microbiology roots and a need to create. “There is definite science. But at the same time, you’re working with live organisms and these recipes you’re creating, so there’s that artistic side.”

Brian is one of two Blacklist brewers running their round-the-clock operation. He takes the day shift so he can make it home to spend time with his family. “It’s still hard to stand back and look at it all. Every day I’m running out of here to help make dinner and put my son to bed, but every once in a while I get out and I see this place busy, and people are having fun, and that’s the part when it’s all worth it.”