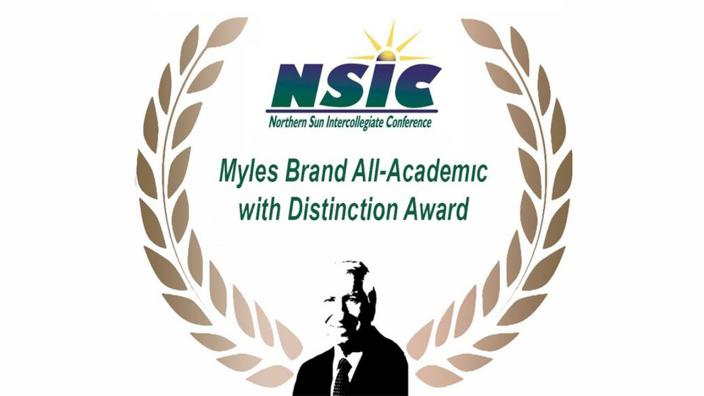 The honor, named for the late NCAA President Dr. Myles Brand, is bestowed upon senior NSIC student-athletes who have a cumulative grade point average of 3.75 or higher, are exhausting their eligibility and are on track to graduate after the season.

A record total of 139 student-athletes from the conference's 16 member institutions received the Myles Brand award, which is in its eighth year of existence.

Dr. Myles N. Brand, visionary leader, educator and reformer, served as the President of the National Collegiate Athletic Association (NCAA) from 2003-2009. He passed away in September 2009 at the age of 67 after a battle with pancreatic cancer. Brand presided over passage of the most comprehensive academic reform package for intercollegiate athletics in recent history – a package that refocused the attention of student-athletes, coaches and administrators on the education of student-athletes. Brand also changed the national dialog on college sports to emphasize the educational value of athletics participation and the integration of intercollegiate athletics with the academic mission of higher education. His impact on Division II ran deep by implementing an identity campaign and a strategic-positioning platform tied to specific divisional attributes. He challenged Division II to continue its game environment and community engagement focus, and improve academic success rates.