Scoring with a Financial Degree 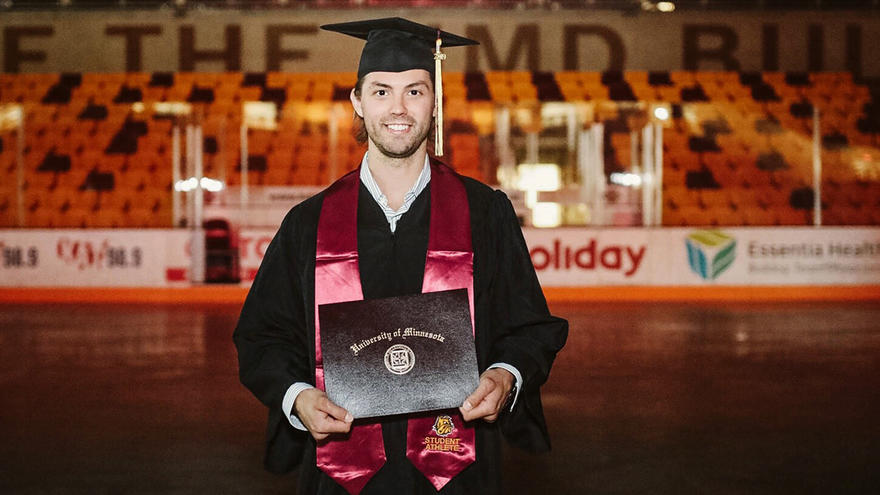 Professional hockey player Rob Bordson returned to LSBE to attain his B.B.A., which was a high priority on his "must-do" list.

Google UMD alumnus Rob Bordson, and you’ll get page upon page of professional hockey stories, stats, and info. But while he has played in the NHL (with the Anaheim Ducks), the American Hockey League, the ECHL (formerly East Coast Hockey League), the Austrian Hockey League, and continues to play professionally, he is thrilled that after 12 years he has attained his Bachelor of Business Administration in Finance from LSBE.

“Walking out of the classroom after my last final in May, I had a feeling I will never forget,” said Bordson.

As a student-athlete, Bordson played hockey for the Bulldogs from 2007 to 2010. “After my junior year, I had the opportunity to fulfill my lifelong dream of becoming a professional hockey player, and I signed my first pro contract.

“I had to put school on hold for the time being, but I always knew I wanted to finish my degree. It was just a matter of when.”

In the summer of 2016, he enrolled to continue his educational journey. Over the next three years, he sprinkled online classes into his life as he played professional hockey in Europe, and came back to UMD in the summers.

But an unfortunate knee injury this past hockey season in Austria allowed Bordson to take the final four LSBE classes he needed to graduate.

“I turned a bad situation into something positive, and it ended with me walking across the stage at the Amsoil Arena.”

Undeniably, hockey is Bordson’s passion, and having his degree will help him continue on with a hockey career after he’s done as a player. “If the opportunity presents itself to coach at the collegiate level, I need a degree.”

“Ideally I’d like to have a full-time career in hockey, but if that doesn’t work or I have a change of heart, I have my business degree in finance to have a business career. “

He hasn’t yet narrowed down what career path his degree might take him. “Banking has always been an interest of mine, but I know that there are a lot of options with a degree in finance.”

Bordson knows that some skills he excels at in hockey will be serve him well in a business setting, such as

Student-athletes can take some words of wisdom from Bordson in the balance of sports and education. “My advice is to stay on top of your homework. It’s very easy to get behind in your schooling during your sport’s season. I also think it’s a good idea to take a class during the May term or summer session. This will pay off during the school year as it will be one less class to worry about during the busy time with your sport.”

Added Bordson, “I hope I can be a good example for future student-athletes who leave UMD early to pursue their passion. Thank you LSBE and UMD for giving me the best 4 (12) years of my life. Go Bulldogs!”