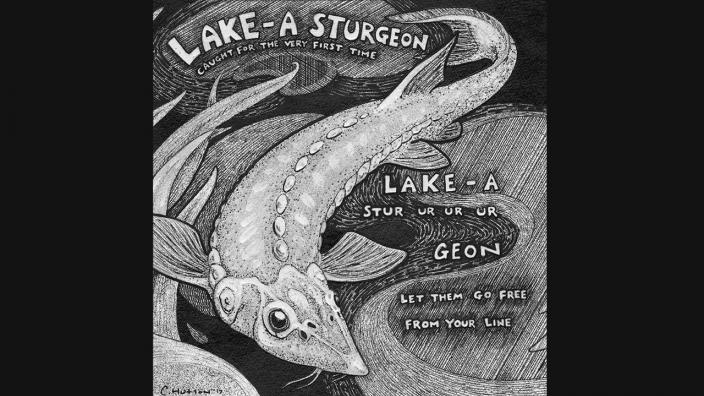 On Friday, April 7, Prøve Gallery, 21 N. Lake Avenue, Duluth, will hold a reception, zine release, and panel discussion in connection with its art exhibit “Black Gold.” Doors open at 6 pm, the panel begins at 7 pm. This event is free and open to the public. The “Black Gold” exhibit runs through April 8.

Nakajima and Houser will serve as facilitators of the panel discussion. Also on the panel will be Nevada Littlewolf, city councilor/leader of Rural and American Indigenous Leadership, Tedy Ozersky, limnologist, UMD Large Lakes Observatory, Paula Pinsky, lawyer and founder of MiNNBOX, and Jay Walker, director of operation, Great Lakes Aquarium.

A fish of legends, caviar, and intensive management, lake sturgeon, Acipenser fulvescens, have been on Earth for over 100 million years. Lake Sturgeon are also one of the longest living fish; a female tagged in Wisconsin was likely 125 years old.

They have a harmless disposition and a toothless grin. Belying their size, they suck their diet of relatively small organisms, including mayfly nymphs, other aquatic insects, and crayfish from the bottom of lakes and rivers. On this diet, lake sturgeon, which are found in the Midwest of North America, can grow to 8 feet long and weigh more than 300 pounds.

Unfortunately, by the early 1900s, they were becoming scarce. People dined on sturgeon meat, used their skin for leather, and made their swim bladders into isinglass (an aspic for pottery cement, waterproofing, and clarifying wine and beer).

Additionally, people, cities, and industries altered water with pollution, dams, and activities that further diminished lake sturgeon populations. In the wake of these multiple stressors, lake sturgeon all but vanished.