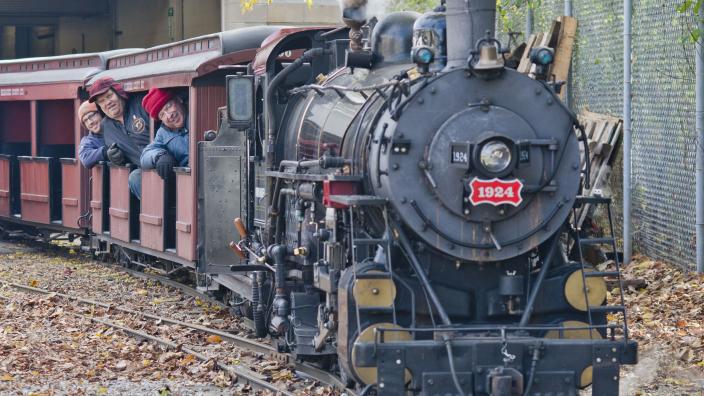 Partnering with the Coalition for Sustainable Rail, a final series of three biofuel trials followed more than a year and a half of development at NRRI’s Renewable Energy Lab in Coleraine, Minn. The Milwaukee County Zoo offered its small 15-inch gauge railroad to serve as a demonstration platform to see how this roasted and pressed biomass fuel product burns in locomotive-style boilers that typically run off fossil coal. Previous tests made sufficient steam to power the trains, but created sparks so improvements were needed.

“Following the first trials, our researchers set about devising a better method to compact the material, including acquiring an industrial scale densification machine,” explained NRRI Associate Director Don Fosnacht. “Combined with a food-grade binding agent, we were able to make dense, durable pellets that burned like coal.”

NRRI is currently researching the opportunities in “torrefied biomass,” a wood-based biofuel that is roasted in a kiln similar to a coffee roaster. After being “roasted,” the wood is transformed into a fuel that burns and reacts much like coal, with virtually no heavy metal pollutants and reduced carbon emissions. For the locomotive tests, NRRI provided three blends of torrefied biomass with varying amounts of binder and a blend with fossil coal. Two mixtures were found to be ideal stand-in fuels for fossil coal.

“The torrefied biomass with binder, and the 50/50 blend of coal and biofuel, worked quite well in both locomotives,” said Coalition President Davidson Ward. “Both fuels burned nearly identical to coal, while being nearly smoke and odor free.”

Initial temperature data also indicate that the biofuel heating value is equal to coal. The maximum firebox temperatures recorded during the biofuel trials were in excess of 2,100 degrees Fahrenheit (1,149C).

The next round of testing will be early in 2018 on a full scale steam locomotive, Everett Railroad’s No. 11, in Claysburg, Penn., where it has been undergoing restoration. NRRI and the Coalition are in the processing of manufacturing 10 tons of the solid biofuel for the tests.