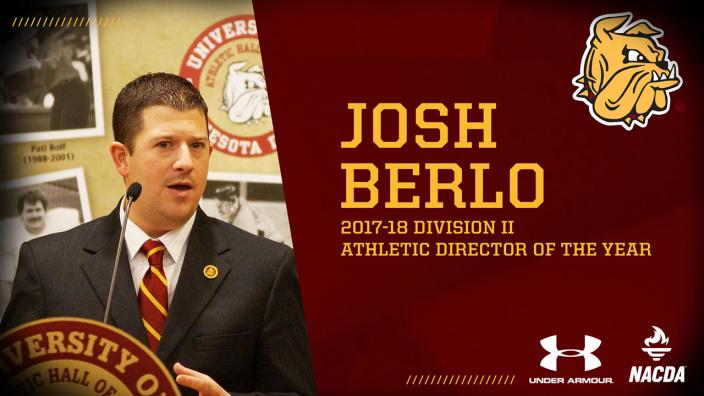 Josh Berlo named a 2017–18 Under Armour Athletic Director of the Year Award Recipient.

The National Association of Collegiate Directors of Athletics (NACDA) announced the 28 winners of the Under Armour AD of the Year Award (ADOY) for 2017–18 and among the recipients is the University of Minnesota Duluth's Josh Berlo.

The ADOY Award highlights the efforts of athletics directors at all levels for their commitment and positive contributions to student-athletes, campuses and their surrounding communities.

"This is the 20th year for the Athletics Director of the Year Program, and each year that goes by, we are continually blown away by the standard of success that these award winners maintain across all levels of college athletics," said Bob Vecchione, NACDA Executive Director. "Over the last two decades, we have been fortunate to recognize more than 425 individuals for the impressive work they do and the examples they set for everyone in our industry."

Berlo, who is winding down his fifth season at UMD, was one of four athletics directors from the NCAA II ranks selected for an Under Armour AD of the Year Award.

"I am very honored to receive this prestigious award," said Berlo, who spent 13 years working in the University of Notre Dame Athletic Department before joining the Bulldog staff in April 2013. "However, it is really a recognition of the amazing accomplishments of our coaches, staff and student-athletes. I could not be prouder of them for helping us earn this distinction for all the great achievements happening everyday in Bulldog Country. I sincerely appreciate the great support of our alumni, student body, fans, faculty, donors, community, campus and Chancellor (Lendley) Black."

Berlo's tenure at UMD has seen sustained and elevated levels of success in the classroom, on the field, and in the community. Among the litany of projects and achievements Berlo has helped spearhead since his arrival at UMD include: the $9 milllion renovation of Romano Gymnasium, expanding television coverage and enhanced broadcast quality locally, regionally (on Fox Sports North) and digitally through the start of Bulldog Productions; signing Under Armour as the official apparel and uniform partner of the Bulldogs (more than doubling the value previously provided to UMD athletics annually); setting the all-time single-season and single-game attendance records for men's hockey  and football; and the addition of $700,000 in LED video and score boards at four on-campus venues. In addition, UMD has experienced four consecutive years of generating over $1.0 million in annual fundraising donations.

Academically, UMD athletics reached unprecedented heights in 2016–17 when 402 student-athletes collectively achieved an average grade point average of 3.21 (which topped the school record set one year earlier). In competition, 13 of 16 programs have qualified for NCAA regional or and national tournament play since the 2013–14 season. Under Berlo's watch -- and with his encouragement -- Bulldog student-athletes and staff have annually provided the Twin Ports area with 3,000-plus hours of community service to scores of organizations.

"On behalf of UMD, I wish to congratulate Josh on being named an Under Armour AD of the Year," said Chancellor Black. "It's well-deserved, as under his leadership UMD Athletics has achieved unprecedented heights in community engagement and academic success – in addition to our Bulldogs' outstanding competitive achievements."

A native of Warren, R.I., Berlo and his wife, Meg, recently became first-time parents with the birth of their son, Michael.